London: British Postal Service, the Royal Mail, has offered an apology after its employee passed racist remarks on a Sikh man in Wolverhampton.

“Quick! Run! He has a bomb!” said the Royal Mail postman, to his colleague, as S. Karnail Singh put his rucksack down, to grab his water bottle. After witnessing the incident Sun Kaur of an NGO called United Sikhs sent a direct message to Royal Mail on twitter, describing the incident and how the behaviour of the postman mistaking Karnail Singh as a terrorist was unacceptable. “My uncle is a Sikh who wears a turban. His rucksack contained his lunch, he is not a terrorist.”

Subsequently receiving the tweet Royal Mail responded quickly and requested to send further details of the location and time of the incident. In an email exchange with the Royal Mail, the postman involved in the incident had been identified.

The Royal Mail sent Karnail Singh a letter of apology (see attached) highlighting that the postman has been identified and while they are limited in what they can tell Mr Singh, the matter will be treated with the utmost seriousness it deserves.

I am grateful to United Sikhs who took this matter forward, Sikhs are continually facing such sort of harassment and we must insure matters like this are handled quickly before harm is done, said Karnail Singh

“It is apparent from recent events that some of the Royal Mail employees have little or no knowledge of Sikhs and what they represent. Since the 9/11 attacks Sikhs have often been the target of racism, and xenophobia which is steadily growing. We will be taking this opportunity to offer guidance and if required basic training notes as part of employee training. We hope this will better equip employees with an understanding of Sikhs. The response from Royal Mail was has been satisfying and we hope that such incidents do not occur again, for any individual no matter their background.” said Sun Kaur. 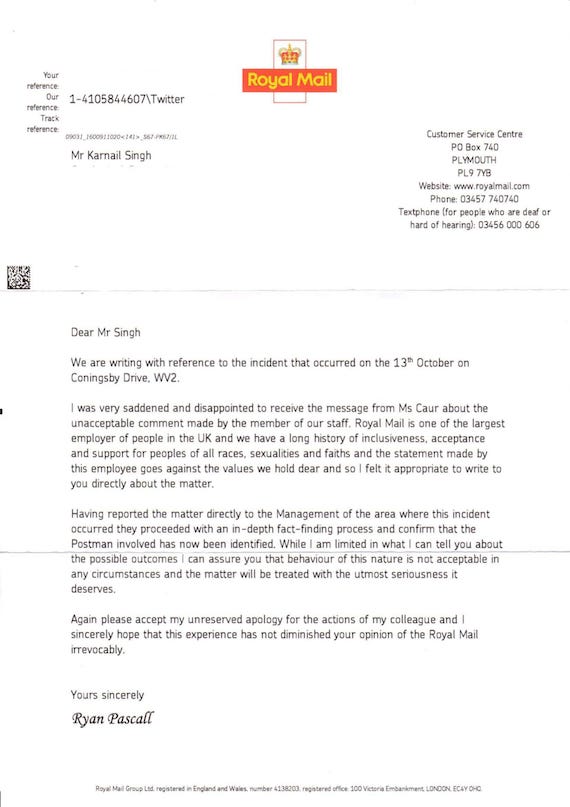