Amritsar: A recently released report has recommend revocation of “sole, exclusive and absolute” rights of PTC Network over Gurbani broadcast from Sri Harmandar Sahib, Sri Amritsar. The report says that no single channel or network can establish monopoly over Gurbani broadcast as Gurbani is Sarab-Sanjhai (common) and there should be a Sangati (community based) broadcasting system.

The report titled “Truth About Gurbani Broadcast from Sri Harmandar Sahib” was released on 2 April 2022 at Chandigarh by a six member probe committee that was tasked by a gathering of the Sikh sangat gathered at Kendri Sri Guru Singh Sabha on 17 January 2020 to probe into violations of Gurmat principals and law, and financial embezzlements. The committee was also tasked to suggest the way forward with regard to broadcasting of Gurbani from Sri Harmandar Sahib. 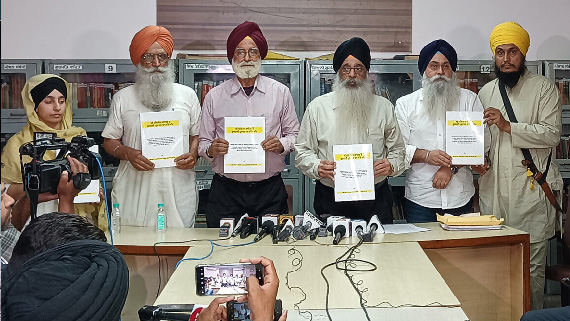 Members of the probe panel releasing the report (April 2, 2022)

The sixth chapter of the report is titled as “The Way Forward”, in which the committee has noted that there are numerous options available, like (a) having your own channel, or (b) extending non-exclusive responsibility of broadcast to third parties or (c) giving conditional open access to all channels, (d) developing a free for all (Nishkam), common (Sarab Sanjha) and collective (Sangti-jugat) system taking guidance from Gurmat.

The committee notes that with the advent of newer technologies in the media space there are even more technical options available nowadays. So, the basic point is that of developing a system.

The committee has suggested that a system should be developed in accordance with the idea of developing a free for all (Nishkam), common (Sarab Sanjha) and collective (Sangti-jugat) system taking guidance from Gurmat.

The committee has suggested that a community wide suggestion seeking campaign should be run and opinion be sought from subject matter experts too regarding this issue.

The campaign needs to collect opinions of Sikh Sangat across Punjab, other parts of India and Sikh diaspora across the world. A wide variety of research methodology tools can be employed to collect and analyse the suggestions so collected.

The committee has said that “the guiding principle to be formed for any such system should be in accordance with the Gurmat, keeping in view the aims and objectives of the broadcasting i.e. prachar-prasar of the Gurbani in a free, common, collective and respectable manner”.

The committee has presented following non-exhaustive of suggestions for guiding principles: