Ontario: As the results for Canada’s general elections were being declared today, it comes out that Liberals led by Justin Trudeau will return to power but will have to seek support of some other party to make legislations as Liberal party did not cross the majority mark.

In the just-concluded Canadian general election, the results of which were declared on Tuesday, the Liberal Party bagged 157 seats, the opposition Conservative 121, Bloc Quebecois 32, NDP 24, Green Party 3 and one Independent. 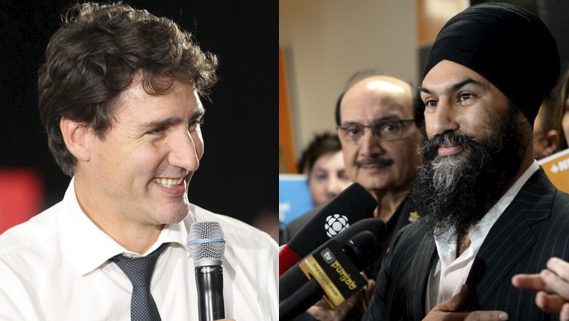 Justin Trudeau would now require at least 13 legislators from his other parties to reach the ‘magic number’ of 170 to form a Liberal Party-led minority government in the 338-seat House of Commons.

“The New Democratic Party is poised to play kingmaker in a minority parliament after Jagmeet Singh spearheaded a turnaround on the federal campaign trail that may have saved his leadership and pulled his party from the brink of irrelevance,” the Toronto Star newspaper reported.

These elections have seen the rise of Bloc Quebecois which favours independence of Quebec from Canada. Notably, this party holds hard stand against religious identities.

The defeat of Conservatives is a set back for Indian establishments and Hindutva lobby in Canada that had invested all its stock to support the conservatives.