Chandigarh: Punjab Pradesh Congress Committee president Capt Amarinder Singh has suggested that the ‘blacklist’ of the Sikh living in various countries should be revised. He said that all those who went abroad for “political asylum” were not (alleged) “anti-national” and further maintained that “most of them were actually the job seekers”.

As per a written statement issued by the PPCC “[a]ddressing a press conference after his return from the United States, [at Chandigarh on May 17], Capt Amarinder said, he will be taking up the matter with the Union Home Minister Rajnath Singh and the External Affairs Minister Ms Sushma Swaraj. He said, barring some anti-national elements, those who used the alibi of political asylum actually wanted to seek jobs and there is nothing wrong in allowing them to visit India”. 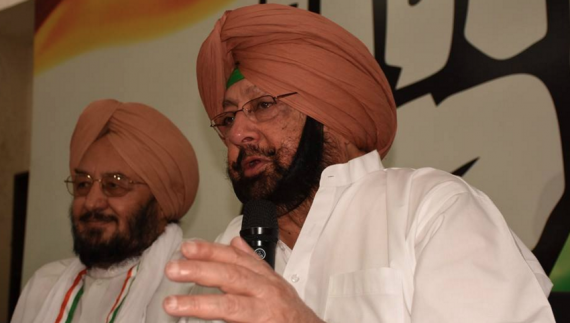 The PPCC president also claimed that he had a “very successful tour” of the US where he interacted with about ten thousand people personally, through media, both mainstream and social and dinner and lunch meetings.

He dismissed the observations that there were protests or people opposed his visit.

He also repeated his allegations against rights group “Sikhs for Justice” and said that SFJ “never talked about justice to anyone”.

“There is a widespread perception and belief among people that the SFJ kingpin Gurpatwant Pannu is doing all this at the behest of the ISI and is being funded and financed by anti-India forces”, written statement issued by PPCC quotes Capt. Amarinder.

About cancelling his Canadian visit, Capt Amarinder said, he had already hired the services of a lawyer there. He said, he will be visiting Canada immediately after the matter is sorted out. At the same time, he dismissed the allegations levelled by the SFJ that he promoted or patronised the police officers who were allegedly involved in torture of people during 1980s-90s.

It is pertinent to mention here that Amarinder Singh had to cancel his visit to Canada fearing court case initiated against him by SFJ for promoting and patronising the police officers involved in torture on civilian Sikh population during 1980s-90s.

SFJ has also registered a complaint against Capt. Amarinder in Canada for labelling the Sikh diaspora group as “agent of Pakistan’s ISI”. The summons issued by a Canadian court in this case were reportedly served to Capt. Amarinder in USA.