Bargari (Faridkot): The Dal Khalsa today urged Punjab Chief Minister Capt Amarinder Singh to come out with the detailed progress of investigation into the Bargari sacrilege case as the facts were still to come out despite the arrest of scores of suspects belonging to Dera Sacha Sauda.

“The police has maintained certain things in the court but nothing categoric has been stated so far as to who are the guilty people and conspirators who had committed the crime of stealing Saroop of Guru Granth Sahib from village Burj Jawahar Singh Wala and committing beadbi in village Bargari. Notably police have arrested six Dera Sauda Sirsa followers but their arrest is recorded in a 2011 arson case. While presenting them to a local court in Moga yesterday (June 12) the police claimed that they were also suspected in Burj Jawahar Singh Wala and Bargari Beadbi cases. (→ Read for Details: Bargari Beabi Case: Police Gets 4 Days Remand of 6 Dera Premis in 2011 Arson Case).

“Most of the newspaper reports are based upon leaks by the investigating agencies. In case of some concrete evidence, it is the responsibility of the Chief Minister and the Director General of Police to set all speculations at rest”, said Dal Khalsa spokesman Kanwarpal Singh. 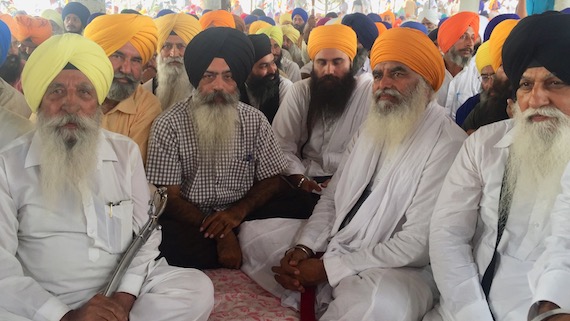 The Dal Khalsa leaders who visited Bargari to participate in the sit-in that has been staged by acting Jathedar Bhai Dhian Singh Mand and associates since June 1 to press for the arrest of culprits who have been roaming free for the last three years, said the firing at protesters at Behbal Kalan in which two Sikhs were killed was part of this case.
The culprits of Behbal Kalan police firing should also be brought to book as they were being shielded by the state apparatus.

While lending support to the Morcha, party senior leader H S Dhami and Ranbir Singh said Sikhs have been shouting from rooftops that Dera Sauda Sirsa (DSS) chief Gurmeet Ram Rahim and his coterie was directly responsible for beadbi but none listened to them- courtesy rulers be at Chandigarh or Delhi patronizing dera chief.
They said prosecuting the real culprit of Behbal Kalan firing was a challenge to the government that Captain Amarinder Singh must accept and adequately respond.

Referring to the role of then DGP S S Saini, they alleged that the orders for firing and cane-charging in which dozens of Sikh activists got injured beside deaths of Gurjit Singh and Krishan Bhagwan Singh came from top.

It is highly regretful that the political willingness of previous and present governments to prosecute the guilty police officers who ordered unprovoked firing on protesting Sikh sangat at Behbal Kalan is totally missing. Rather both the governments were trying to shield the ‘state’s instrument’.