Patiala, Punjab (August 12, 2014): Notwithstanding that the Punjab Pradesh Congress Committee president, Partap Singh Bajwa, is camping at Talwandi Sabo for the bypoll campaign, the party’s candidate, Harminder Jassi, has asked the high command to depute Amritsar MP and former chief minister Capt Amarinder Singh for his campaign too. 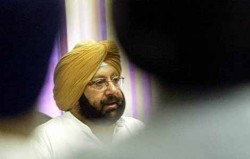 But Capt. Amarinder, whose wife and former minister Preneet Kaur is contesting Patiala seat, has no time to spare. To resolve the issue of deputing leaders at both Patiala and Talwandi Sabo, the high command has reportedly asked both Preneet and Jassi to send a list of leaders they want to campaign at the respective seats.

Though Preneet Kaur, who recently lost the Lok Sabha election from Patiala, has never shown the intention to call Partap Singh Bajwa for her campaign, Harminder Jassi, a close relative of controversial godman Gurmeet Ram Rahim of Dera Sauda Sirsa, wants Capt. Amarinder to spend at least some time in his constituency, where he is facing Congressman-turned-SAD candidate Jeet Mohinder Singh Sidhu and the AAP’s Baljinder Kaur.

Amarinder simply said he had “no time for any other constituency”, as he had to campaign in Patiala, which had thrice elected him to the assembly. He resigned from the seat after being elected to the Lok Sabha in May.

“I am aware that both elections are important. But this seat (Patiala) is a prestige issue for me. It is my home town, my own constituency and my wife Preneet Kaur is contesting. I can’t spare time for any other area, as already I remained engaged in the Lok Sabha session and only 10 days are left in the campaign”, Amarinder told.