Hoshiarpur: Delhi Chief Minister and central conveyor of the Aam Adami Party Arvind Kejariwal while targeting Punjab Congress Chief Capt Amrinder Singh here today said that Punjab would have been free from drugs and narcotics if Capt had not sought protection for Punjab Revenue Minister Bikram Majithia from Sonia Gandhi. 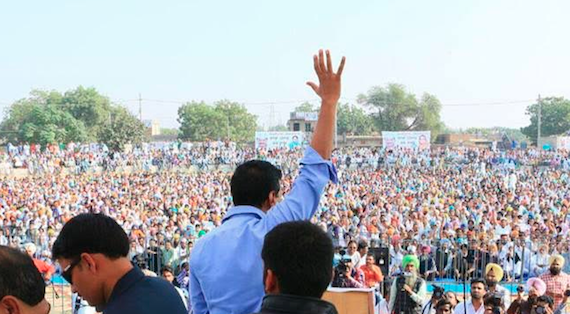 A view of AAP rally at Hoshiarpur [File Photo]

While addressing a series of rallies at three different places in Hoshairpur today, Kejariwal stated instead of protecting Punjab from drugs and narcotics, Captain Amarinder preferred to save his own nephew Majithia from the dragnet of Central Bureau of Investigation (CBI), which has own party was vociferously demanding.

“I have learnt that Captain went out of his way to protect Majithia from CBI probe by requesting Sonia Gandhi, who was UPA Chairperson at that time, not to act against his nephew”, Kejriwal said adding otherwise what prevented the Congress Government led by Dr Manmohan Singh at the centre from arresting Majithia and saving Punjab from the spread of drugs and narcotics” he said.

Delhi CM further alleged said that the collusion among Punjab Chief Minister Parkash Singh Badal-Captain Amarinder Singh-Sukhbir Badal-Bikram Majithia became evident when the SAD-BJP government about a month back withdrawn all corruption cases against him to return the favour which Captain did to Akalis when UPA Government in power.