Chandigarh: Indian state’s premier investigation agency, the Central Bureau of Investigation (CBI) told a Delhi court on Sept. 11 that Congress leader Jagdish Tytler was not involved in the 1984 Sikh genocide and the probe agency cannot implicate him on the basis of “assumptions and presumptions”.

As per media reports [t]he CBI told Additional Chief Metropolitan Magistrate Saurabh Pratap Singh Laler that it was established during the investigation that Jagdish Tytler was not involved in the attack on Gurudwara Pul Bangash on November 11, 1984.

The CBI reply came on a petition filed by victim Bibi Lakhvinder Kaur, against the CBI’s closure report giving a clean chit to Congress leader Tytler for his alleged role in the violence.

Bibi Lakhvinder Kaur’s husband Badal Singh was killed in the genocidal violence that left thousands dead after the assassination of then Prime Minister Indira Gandhi.

The CBI said it has conducted a thorough, fair and impartial investigation in a professional manner.

“However, the CBI being a responsible investigating agency cannot “falsely implicate” and prosecute an “innocent person” merely on the basis of assumptions and presumptions,” the CBI stated. 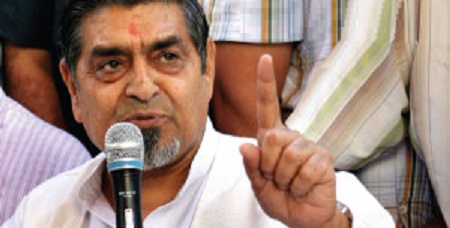 It further submitted that the investigating agency was required to look into all aspects and versions to find out the truth.

The court was hearing the closure report that gave a clean chit to Jagdish Tytler. It was for the third time that the CBI filed a closure report in the case.

In her plea, filed through senior advocate H.S. Phoolka, Lakhvinder Kaur has sought the court’s direction to the CBI to probe the matter further to bring on record available incriminating evidence against the accused and sought action against Mr Tytler over allegations of influencing witnesses and money laundering.

Advocate H.S. Phoolka, who is representing the victims, said the CBI’s investigation was “faulty, tainted, dishonest and perfunctory”.

The agency twice earlier gave a clean chit to the Congress leader. In April 2013, a sessions court rejected the closure report and ordered the agency to further investigate the killing.

The CBI did that but again filed another closure report on December 24, 2014 saying that there was not sufficient evidence to proceed against Jagdish Tytler.

Sikh Genocide 1984 – Denial of justice by the Indian State:

Accused of November 1984 escaped trials or punishment for past 30 years with active political patronage. Recently a retired Bombay High Court judge criticized Indian judiciary for its failure to punish the culprits of November 1984 Sikh genocide.