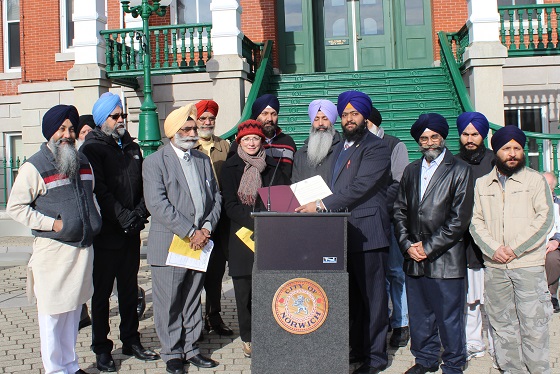 He said “[t]hese these kinds of events are very important for our society and are vital part of our American values as well. Today our motive in not to point figures at Indian govt. for their wrong actions nor to hurt anyone sentiments but we cannot revise the history”.

“Our motive to educate our fellow Americans and our new generation that what was the real story behind 1984 Sikh Massacre. And the most important how we can provide Closure to Sikh community ,in which we will need everyone’s help”, he added.

“Sikhs have always stand for justice for everyone even when Muslims were killed in Gujarat or when Christians were killed in Nagaland and always remembered the lines of Dr Martin luther king that ‘injustice anywhere is a threat to justice everywhere”.

Other speakers like Pritpal Singh (NewYork) also shared their views and history with everyone and appealed everyone to work on getting Sikh community Closure by sending culprits of Sikh genocide behind bars.

“The mobs aided by the police came to rape and torture the females in our families and kill the males. We were lucky that we escaped after a brave fight. But…my three cousins were burnt alive in front of their Mother and wives who were raped and tortured. Our home and automobiles burnt and we became strangers and hated in our own country. Nobody came to help. I moved to the USA as soon as I could and can never forgive and forget India and her citizens for doing this to us.” – Gurmeet Kaur.

BBC News – “One of the worst massacres took place in two narrow alleys in the city’s poor Trilokpuri colony where some 350 Sikhs, including women and children, were casually butchered over 72 hours.”

Ranveer Singh – “…it was a well-orchestrated and calculated attempt to systematically kill and rape as many Sikhs as possible, as well as destroy their homes, businesses and places of worship.”

“Rather than helping, policemen were actually complicit in the mob violence. I remember seeing some of them standing outside our coach and encouraging the mob that we (the Sikhs) must be killed and no one must be spared.”
– Dr. Satpal Singh
BBC News – “Of the 2,733 officially admitted murders, only nine cases have so far led to the conviction of 20 people in 25 years; a conviction rate of less than 1%.”

Pritpal singh also said “Sikh houses, dragged out the young men, killed and burnt them and set the houses on fire. In some cases, the assailants hit the victims with iron rods on their heads before pouring kerosene on them”.

Mr. Dale Plummer Norwich City Historian seemed to be in very high sprits and also wore Turban to show his respect towards Sikhs.

Manmohan Singh Bharara from Gurudwara Sachkhand Darbar Hamden who made a wonderful speech that people present their had tears in their lives.

Historic Proclamation was delivered by Hon. Mayor Deb Hinchey City of Norwich were she announced Month of November 2014 as a Sikh Awareness and Appreciation Month in Norwich,CT and shared the grief of Sikh Community.

Norwich Freedom Bell was rung 5 times In memory of all innocent and Sikh Defenders who gave their lives during attack on Darbar Sahib (Sikh holiest place of worship) by Indian Army and During Sikh Massacre that took place in India in Nov 1984.

Some names that were recognized were:

Everyone was given Commemorative Coin issued by Root gears on 30th anniversary of Sikh Massacre.