Today on the 8th of May, 2019, on a second day in succession, people protesting at Connaught Place, against the “clean chit” given to Justice Gogoi by an in-house inquiry that violated established procedures and principles and demanding an independent inquiry, were detained at Mandir Marg PS. The police came in large numbers armed with a water cannon. These events are an action replay of yesterday, 7th May, when a large police force that too was equipped with water cannons forcibly picked up and detained about 50 women activists who were protesting on the same issue outside the Supreme Court. One of the issues in today’s protest was the crackdown on yesterday’s demonstration. 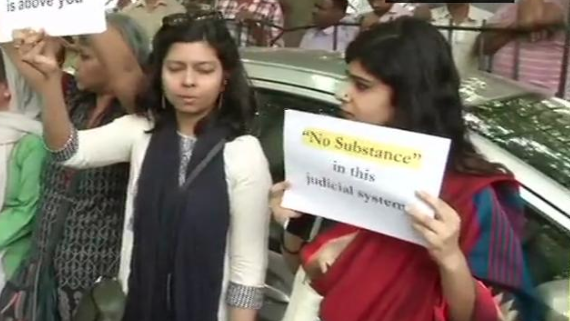 While the police is clamping down on protest demonstrations against the “supreme injustice”, a plethora of cases have been filed against the complainant and those supporting her rights. These pleas and affidavits echo the refrain set up by none other than the accused, Justice Ranjan Gogoi, the Chief Justice of India. On 20th April in a special hearing purportedly on “the independence of the judiciary” that he himself ordered, the CJI sat on a three-member bench, denied all charges of sexual harassment, maligned the complainant, and declared that a “bigger  conspiracy” was afoot to “deactivate the CJI’s office.” The very same evening SC advocate Utsav Singh Bains alleged a “conspiracy against the CJI by a lobby of disgruntled judges, SC fixers…” etc. and filed an affidavit before the SC on 22nd April. In marked contrast to its response to the sexual harassment charges, the Court appointed a retired judge to look into Bains’ charges, and also directed the CBI, IB and NIA to help. On 6thMay, the day the CJI was given a “clean-chit”, SC advocate ML Sharma filed a petition asking for an SIT into a “planned conspiracy” against the CJI by democratic rights lawyers Prashant Bhushan, Indira Jaisingh and others through “a concocted, false sexual harassment case”. Justice Bobde, who headed the in-house inquiry, agreed to list it. Not surprisingly the Bar Council of India, which extended unconditional support to the CJI when the news of allegations first broke, has now declared its stand vindicated by the findings in the Committee’s report (a report which the Committee has refused to release, even to the complainant). It has called for protecting the “independence of the judiciary,” warning of a larger conspiracy and deeming the woman’s allegations “fishy.”

The government has thrown its weight behind the CJI from day one. The Union Finance Minister, Arun Jaitley, asked for support for the CJI on 21st April, calling the complainant someone with a “questionable track record”, and the media that published her affidavit “institutional disruptors”. At the 20th April “special hearing,” both the Attorney General and Solicitor General, whose role is to appear for the Government and who had no locus in the matter, rubbished the allegations and carried out a character assassination of the complainant. Both offices are expected to assist the Court and Government in fulfilling their constitutional obligations, not participate in proceedings violative of natural justice. They later even asked for an SIT to be constituted to probe the “conspiracy”.

Except for a handful of judges, and advocates of whom a large number are women, the judiciary has chosen not to criticise nor express any disquiet over the CJI’s abuse of authority, and the brazenly flawed inquiry. The functioning of the inquiry committee in fact illustrates why the Court’s own guidelines emphasise the presence of external members in panels inquiring into sexual harassment at the workplace. The mere presence of two women Justices did nothing to ensure a fairer procedure, as the CJI was senior to them, besides of course being the highest judicial authority in the land. The committee continued with its inquiry even after the complainant had walked out, and has not even given her a copy of its report.

Voices from within the legal fraternity, which argued that the principles of natural justice and Vishaka guidelines should be upheld, were at best marginal. There could scarcely be clearer proof that the judiciary itself is far from fair and impartial, and certainly not when it comes to gender-based harassment. The immediate banding together of the judicial and legal fraternity, the executive and the administration speaks of an immense insecurity regarding sexual harassment at the workplace. If a complaint can be brought against someone as powerful as the CJI by a lowly ex-staffer working directly under him, the dual power of gender and public office are threatened, and hierarchy has to be reinforced in no uncertain terms.

The balance of power could not be more stark. The judiciary, the legal fraternity, the government and the police have bonded to protect the CJI in response to a most basic demand: that the minimum guarantees the Court itself has made should be upheld, most prominently the Vishaka guidelines, PoSH at the Workplace Act, and fundamental constitutional principles regarding a fair hearing. The “independence of the judiciary” has been given new dangerous meanings. A separation of powers to ensure checks and balances necessary to democratic functioning has morphed into a call for the judiciary, government and administration to rally together so that  they can evade all accountability.

What the women of India are being told is that one judge is synonymous with the judiciary; that gender-just laws brought in after long struggles by women can be shortly dispensed with; that high public office continues to place men above the law; that women employees have no rights and women are not entitled to constitutional freedoms; and that no matter how basic, the principles of the rule of law and natural justice can and will be flouted if we question the powers that be. It is a cause to rage collectively when hard-fought rights can so easily be thrown to the winds by none other than the highest body meant to defend them. Today these are the rights of a working woman, but they set a precedent for the decimation of fundamental rights of all citizens and not just those who are already disadvantaged. We have looming before us a society and polity where individuals become larger than institutions, and where all arms of the state are complicit in silencing all challenges to an arbitrary exercise of power by the authorities.