Wolverhampton, England: The 15th Sikh Federation (UK) National Sikh Convention at Guru Nanak Gurdwara, Sedgley Street, Wolverhampton on September 17 was attended by Sikhs from across the UK and Europe. The event was broadcast live on television and via the internetacross the globe through KTV (Sky 858).

In his key note speech at the Convention Bhai Amrik Singh, the Chair of the Sikh Federation (UK), told the participants that the Sikh Federation UK was hopeful to create pressure in the next 18 months through a coalition of up to 200 MPs across the political spectrum that will force the British Prime Minister to make a full apology in the House of Commons for the shameful massacre of unarmed civilians at Jallianwala Bagh in Amritsar on 13 April 1919. 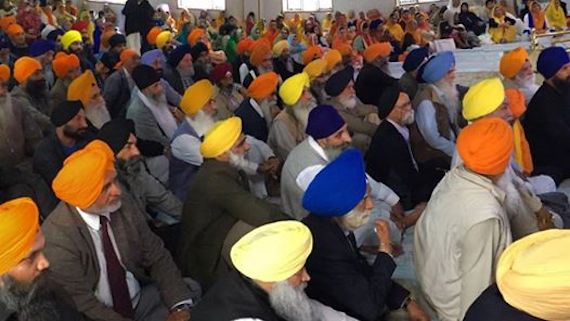 “In 2013 David Cameron visited Jallianwala Bagh, in Amritsar where on the occasion of Vaisakhi on 13 April 1919 soldiers of the British Indian army fired at thousands of unarmed men, women and children who had gathered. During his visit he described the Amritsar massacre as ‘a deeply shameful event in British history, one that Winston Churchill rightly described at that time as monstrous. We must never forget what happened here and we must ensure that the UK stands up for the right of peaceful protests’ “, he added.

“While the words of David Cameron in 2013 when he visited Jallianwala Bagh were comforting they fell short of an apology for the shameful massacre of unarmed civilians in Amritsar on 13 April 1919”, chair of the Sikh Federation UK said.

“We will focus our efforts in the UK by gaining cross-party support to demand a full apology before the 100th anniversary from Theresa May, assuming she remains Prime Minister”, added he.

“We are confident of support from MPs as many know the massacre came within months of the end of the First World War where Sikhs made sacrifices in huge numbers for the freedom of Europe.”

In a press release sent to the Sikh Siyasat News (SSN), the UK based Sikh body said: “Sikhs across the globe, especially in Commonwealth countries, will also step up their demand for the apology by raising the matter with their Heads of State. The Sikh Federation (UK) will reveal they have already been in communication with Sikhs in a number of Commonwealth countries including Canada, Australia, New Zealand, Pakistan and Malaysia. They will be co-ordinating efforts by pressuring their own Heads of State to raise this with Theresa May ahead of and at the important 25th Commonwealth Heads of State meeting to be hosted in the UK in April 2018”.

“Sikhs in Canada are believed to have already raised this with Justin Trudeau, the Canadian Prime Minister, who on 18 May 2016 made a full apology in the House of Commons for the Komagata Maru incident from 1914. He has been asked to lead the international call for an apology. Sikhs in Australia and New Zealand have confirmed they will be raising it with Malcom Turnbull and Bill English respectively”, the statement reads further.

The Sikh Federation (UK) representatives said that the last 12 months have seen further revelations about what happen in the Thatcher era despite attempts to maintain the cover up, the Labour Party make a historic manifesto commitment on the issue, the commencement of legal proceedings and extensive national media coverage of the issue.

“The Sikh Federation (UK) will be putting down a political challenge to Theresa May. Following the Labour Party commitment in their general election manifesto the Sikh Federation (UK) will tell those gathered they are confident they have the support from a majority of MPs in Parliament for an independent public inquiry. They will say they have done the maths with the support of the 262 Labour MPs, 35 SNP MPs and MPs from the smaller parties and need the support of only 12 Conservative MPs”, maintains the Sikh body.

The Convention was also attended by both new Sikh MPs elected to Westminster in June – Preet Kaur Gill and Tanmanjeet Singh Dhesi. Other local MPs who attended the event include Pat McFadden and Eleanor Smith.