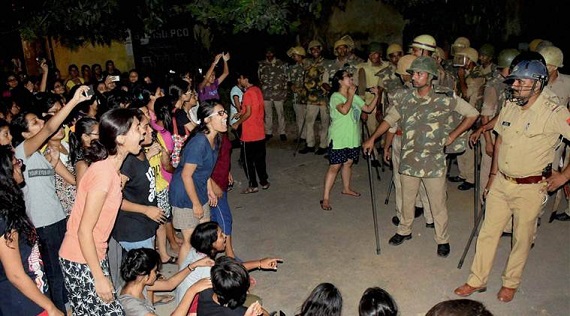 Varanasi: Students and police in a standoff in Varanasi late Saturday night. Female students at the prestigious University were protesting against the administration’s alleged victim-shaming after one of them reported an incident of molestation on Thursday. PTI Photo.

“University authorities must not turn a blind eye to allegations of sexual harassment and discrimination. Students have a right to peaceful protest. The police say that some of the students threw stones at them, but that cannot be an excuse to baton-charge the women students who were staging a peaceful sit-in.”

“The police have now registered over a thousand criminal cases against students, but not one against any of the officials who used unnecessary or excessive force. Both university authorities and the Uttar Pradesh police have showed a shameful abdication of their duty to respect and protect the rights of students at BHU.”