Cracks in HSGMC over election support to Congress party in Haryana

Kaithal, Haryana: Newly formed Haryana Sikh Gurdwara Management Committee (HSGMC) is reportedly divided over the of expending support to Congress in the upcoming assembly polls. Top leadership of HSGMC has decided to back the ruling party but according to media reports, but there are some rebels as well. 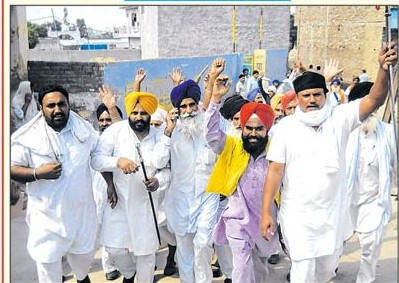 According to media reports HSGMC youth leader Amarinder Arora has struck a discordant tone. Amarinder Arora said that leaders excommunicated by Akal Takht have no right to take decisions on behalf of the community.

According to Arora, there has been no meeting of HSGMC since it was formed. He alleges that some of the top leaders are only trying to call the shots at present.

But HSGMC chief Jagdish Singh Jhinda has reportedly denied all the allegations. He has stated that decision of supporting Congress was taken keeping all the members in the loop.

Jagdish Singh Jhinda said that Amrinder Arora was an ordinary member of HSGMC and disciplinary action will be taken against him for trying to confuse the Sikhs of Harayna.

The polling for state assembly will be held on October 15 in Haryana.