Amritsar, Punjab: The Dal Khalsa today hits out at chief minister of J&K and Punjab for following the dictations from New Delhi.

Dal Khalsa spokesperson Kanwar Pal Singh and chairman of Sikhs for Human Rights Harpal Singh Cheema said “the Hindutva party despite being in minority in Punjab and Kashmir was running the border states via New Delhi”. Both the chief ministers Mufti Mohammad Sayeed and Parkash Singh Badal has no guts and will to protect the interests and aspirations of their people concerned. Rather in the lust for power and privileges, they unleash injustices on them to appease the people in Delhi. 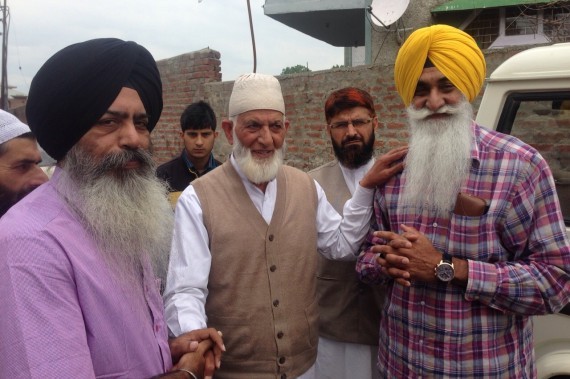 The leaders issued the statement after returning from Srinagar where they went to attend the seminar titled “Indian state fascism and Our response”on the invitation of Hurriyat Conference led by Syed Ali Geelani. Notably, the J&K govt banned the seminar and the police detained them at police station Sadar to prevent them from attending the seminar.

They said India claims to be a practicing democracy, however, banning the seminar was undemocratic step.

They said the Indian media gave bad name (anti-India seminar) to the function only to provoke the BJP led Union government to press upon the state administration for a ban. They said the BJP and its parent body the RSS was scared of minorities coming together on single platform to formulate joint strategy to resist the nefarious designs of the common enemy to subsume their identity and suppress their aspirations. “We, the Kashmiri Muslims, Sikhs and Christians are the oppressed people and the oppressor is the New Delhi”.

They rue that next day the police didn’t allowed them to meet Geelani Sahib at his Hyderpora residence. “We wanted to see him and pay respect to him. But police remained adamant and does not allowed us to enter his residence. However, hearing upon our arguments with cops, Geelani Sahib came out of his house on street and hugged us. Emotions ran high as representatives of both the minority communities pledged to maintain the workable co-ordination between each other. Geelani Sahib told us “Es sanjh ko banaye rakhna” (keep this relations intact) to which we responded positively and firmly.