Amritsar:  In a meticulous attempt to step up its campaign to restore the original Nanakshahi Calendar, the pro-freedom Sikh party Dal Khalsa launched the year 549 calendar in its original form, as designed and prepared by Canada-based Pal Singh Purewal, accepted by the SGPC general house and ratified by the Akal Takht Sahib in March-April 2003 but was withdrawn by the SGPC in 2010. 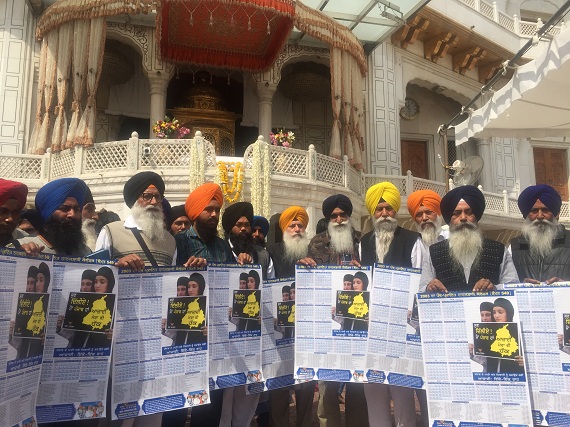 After performing ardas at a simple ceremony at the Akal Takht Sahib, the Dal Khalsa leadership released the calendar of current year and distributed to the Sikh Sangat gathered on the occasion. “We are determined to restore the Nanakshahi calendar to its pristine glory.” The Bikrami khichdi will not work for long.” said party president Harpal Singh Cheema.

The then president of the SGPC -Avtar Singh Makkar, who was shameless to accept the amended calendar has been replaced from the SGPC leadership. It is now time to also remove the other key person responsible for the mischief Gaini Gurbachan Singh-the present SGPC backed Jathedar of Akal Takht Sahib. “It’s time now to oust this disgraced and rejected Jathedar from top temporal seat”.

Regretting that the dates of Guru Nanak Sahib’s Gurpurab, Bandi Chor and Hola Mohalla were not fixed as per Nanakshahi at the time of its launch in 2003 under pressure from RSS/BJP lobby, he said they will build consensus amongst the community to fix these dates too.

Taking to the media at party office, spokesperson, Kanwar Pal Singh said, “Nanakshahi Calendar is no ordinary matter. It is a manifestation of distinct identity and winning that back is a step towards regaining Sikh sovereignty. The calendar is a clear symbol of the “Sikhs as a separate people”, set up and nurtured by the Gurus.  We view the SGPC made amendments as “abject surrender in the face of the expansionist designs of RSS leaders aiming to subsume the Sikh religion.

“The Badal Dal, under the influence of a section of the Sant Samaj tactfully reverted to Bikrami calendar but deceitfully retained Nanakshahi its name” he further said.

The calendar released today not only has historical holidays but also dates relating to the contemporary Sikh struggle. Having the image of two girls proclaiming Punjab’s Azaadi from Indian yoke, Dal Khalsa is poised to take their message into people’s homes.

“The present incumbent of the Shiromani Gurdwara Prabandhak Committee Prof. Kirpal Singh Bandungar was instrumental in initiating the acceptance of the Nanakshahi calendar in its original form. Dal Khalsa will engage with him and the SGPC to correct the wrong done by the institution,” said party’s senior leaders Satnam Singh Paonta Sahib and Baldev Singh Sirsa.

“If the Akali Dal had any illusions of setting aside the Panthic agenda and winning elections on the development plank, it should be over after their defeat in the assembly polls. Should they want to win back Sikh hearts, accepting the Panthic agenda and bidding goodbye to heretical Dera’s and unnecessary meddling in Sikh religious affairs is the only option.” said Paramjit Singh, head of the Sikh Youth of Punjab.