Amritsar: On the eve of India’s republic day, the Dal Khalsa and its allies today staged a spirited protest against what they termed as Constitutional denials and wrongs and sought from country’s dispensation to show magnanimity and allow the struggling peoples residing in the peripheral states of the country the ‘right to self determination and right to secede’ in the light of the commitment made by India’s first PM Jawahar Lal Nehru in his speech broadcast on 3rd June 1947.

Terming 26 as a day of deceit and assimilation, the organization gave the call for boycott of republic day celebrations. 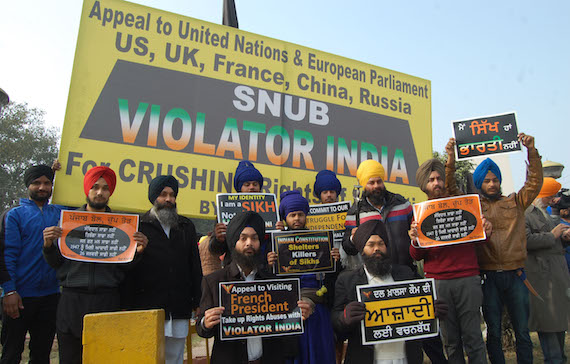 Hundreds of activists of Dal Khalsa, Akali Dal Panch Pardani and Sikh Youth of Punjab were carrying placards and banners to convey their message. In a first, the organizers of the event had appealed to Five UN Security Council permanent members (US, UK, France, China, Russia) not to get carried away by Indian claims for seeking permanent membership as India has a very poor human rights record.”

The organizers tactfully chose the occasion to reach out to visiting French president Francois Hollande by appealing him to support and endorse the case of human and political rights of Sikhs and other minorities as the Indian leadership refuses to honour its commitments and has crushed their aspirations and subsumed their distinct identity.

The protesters carrying black flags marched on the streets and staged a rally outside circuit house and Deputy Commissioner office. They vent their anger against the establishment for allowing the wounds of Sikhs to simmer and not recognizing the rightful aspirations of Sikhs to become the masters of their own destiny.

They lend their support to Hurriyat Conference leader SAR Geelani (under detention since long) and famous writer Arundhati Roy and warned the Indian state to refrain from muzzling the voice of both. They were of the view that the establishment was afraid of both and wanted to silence their voices of reasoning and truth.

Addressing the demonstrators, the Dal Khalsa leader Kanwar Pal Singh said that last year India invited US president Mr Barack Obama to preside over the republic day parade and this year it has invited the French president for the same with an aim to portray to the world that all is hunky dory in India and that India is rising in all spheres and emerging as an Asian giant.

Urging the US, UK, Canada and France to look into the flip side of the case, he termed ‘India as Janus-faced’. While India might have won some brownie points on diplomatic front, what is amply clear is that in the domain of intolerance and rights abuses, India has surpassed all others.

Commenting on Indo-French resolve to fight jointly against terrorism, he said every sensible person was against the menace whether its state sponsored or individual act. He condemned forces that were unleashing terror on innocent peoples of India and Pakistan.

Harpal Singh Cheema, chairman of Sikhs for Human Rights said the right to secede was recognized by the Geneva Convention. Many countries have attained independence through plebiscite. It is not unconstitutional. “We believe the only way forward for Punjab is to attain freedom from India yoke”.