Hoshiarpur:  Paramjit Singh Tanda, newly appointed general secretary of the pro-freedom Sikh group Dal Khalsa in a bid to expand its organizational base formally launched the membership drive in Punjab and gave the call to the youth to come on the forefront to lead the non-violent movement for justice and freedom. 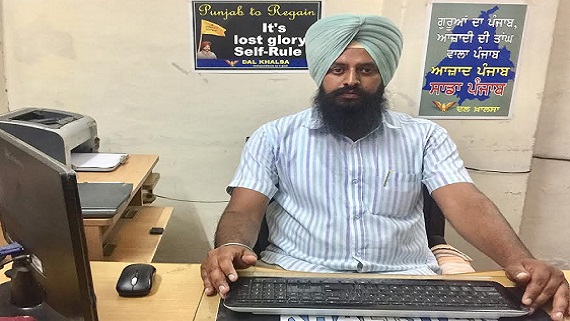 To infuse young blood into the organization, the Dal Khalsa has recently nominated three youths on important posts in the party’s hierarchy.

Prioritizing their activities for the coming year, he said they have fixed four-point agenda for which they would campaign wholeheartedly through-out this year. “The agenda include imbibing spirit of nationalism in youth, persuading youth to be in tune with the changing world, raising level of awareness against drug menace and working with Dalits and other ethnic minorities to build warm relations with them, Paramjeet Singh Tanda adds to his statement.

Furthermore, he stated that they would intensify their campaign to remove the disgraced and controversial Gaini Gurbachan Singh from the post of Shir Akal Takhat Sahib’s jathedar. Notably, Dal Khalsa on Sep 29 2015 while protesting against the faulty decision of Takhat Jathedar’s to pardon Gurmeet Ram Rahim tore copies of the “hukamnama” outside Akal Takhat Sahib’s secretariat.

“The young Sikhs were abandoning their motherland and chasing petty jobs abroad. “It’s ironic that people from the South go abroad as IT professionals and Punjabis as drivers”. He appealed to the young boys and girls of the state to change the trend of ‘running to western countries’ in search of better lives as their absence has been filled by heavy inflow of migrants that have posed threat to language, culture and demography of the state.”

“Reiterating their principal stance of staying away from parliamentary and assembly elections under Indian dispensation, he said that the sacrifices made by our brethren have put a great onus on us to carry on with a mission for independence and not to trade them for electoral and personal gains.”

Paramjit Singh Tanda further declared his parties dream for a `sovereign Punjab’ and reaffirmed that they would stick to democratic path to achieve their objectives. Despite all odds we will pursue the struggle for self-determination,” he added.

Dal Khalsa congratulated British Sikhs especially Sikh Federation UK for the successful lobbying in the British members of Parliament, who have urged the UK Statistics Authority to include Sikhs as a separate ‘Ethnic Box’ for 2021 census. The campaign launched by a large section of UK Sikhs to register their ethnic origin in the official data as Sikhs and not as Indians was commendable, said he.