Tumakuru(Karnataka): As per the media reports on the 1st day of the four-day fair of mythological Goddess Kucchangiyamma, it was for the first time that Dalits entered the temple under an agreement engineered by the police.

But it ended abruptly that day, shortly after the Dalits came out of the temple. There was to be no Day 4 of the fair in the village of 200 households in Tumkuru district, around 75 km northwest of Bengaluru. “The bull ran away because of the Dalits,” is a bizarre jibe  Kottihalli’s Dalits allege they heard from Hindus. “We also heard the bull had stopped eating because Dalits entered the temple,”  Mahalingaiah, 53, a Dalit resident of the village told the media.

It was reported by the media that  day before the fair, police had held a peace meeting between Dalits and Hindus. The Dalits had petitioned the police to ensure they faced no caste based discrimination during the event.

“We entered the temple about 5 am on May 21, but the priest refused to perform the puja,” added Mahalingaiah

“The priest agreed after police intervened. We offered prayers till about 7 am.” He added, “After we came out of the temple, the savarnas jati (Hindus) started taking down decorations around the temple. We were told the fair had ended.” 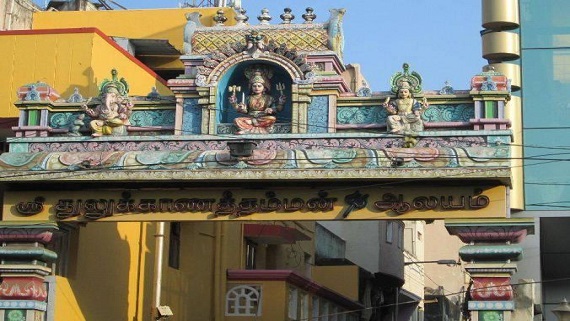 While interacting with the media person of a local print deputy superintendent of police, K Nagaraj, said  “We had gathered all the residents and told them that temple entry for the Dalits would have to be allowed. Everybody had agreed.” Police saw the agreement crumbling.

However, the local hindus of the area presumably said that the fair being called off was not related to Dalits entering the temple. “An old woman who lived near the temple had died about a week ago and, as is the norm, there is a period of mourning. That is the reason the fair was called off,” said Ranganna, 45, an upper caste local resident.

Whereas, the statement of Ranganna contracdicted to that of above mentioned dead women’s son Kumar.

“How dare they say the fair was called off because of my mother’s death? The mourning period ended three days before the fair. If they really were mourning for my mother, they should not have conducted the fair at all,” he reportedly said.

Police organised yet another peace meeting on Thursday to resolve the crisis, but the Hindus did not turn up. An elderly Hindu resident of the village who did not want to be named said Dalits had ‘enjoyed’ reservation, drawn the benefits of education and were more affluent. “You cannot say anything against them, even if they have benefited from the state’s largesse.” notes Hindustan Times (HT).

“I told them that they could conduct the puja themselves.” The village has two Kuruba households and members of these families have traditionally been the priests, reads the statement of the temple priest Chikkanna to the Press Reader, while justifying his reluctance to assist Dalits in offering prayers.