Chandigarh: The pro freedom Sikh group Dal Khalsa here today  urged Delhi Sikhs to favour those candidates in the ensuing gurdwara polls who have stood with Panth in the past and defeat those who have ditched the Panth for political or personal benefits.

The Sikh group observed that by keeping Badals at bay in the DSGMC election campaign is a clear sign of a ploy by Manjit Singh GK and his team to hoodwink voters and also a clear admission by them that the father-son duo is more of a liability than an asset. 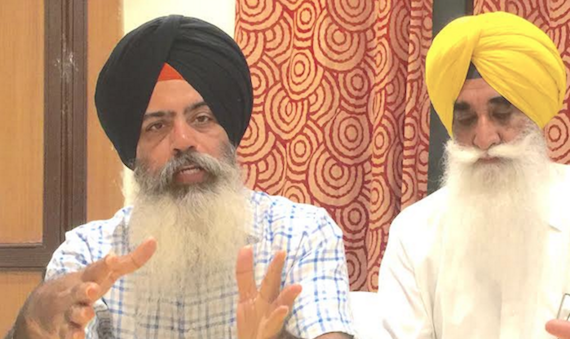 In a scathing verbal attack on the current rulers of Punjab, the Dal Khalsa leaders observed that the Badalization of Akali polity has led to denigration of Sikh religious institutions.  Party head Harpal Singh Cheema and spokesperson Kanwar Pal Singh said it is ironic that instead of strengthening inner democracy in the working of important Sikh institutions, the Badal family has established a monopoly on it and ruined their autonomous character.

Be it the SGPC or DSGMC, both are in wrong hands. It is time for the Sikh Sangat of Punjab and Delhi to put these institutions into the right and clean hands, overhaul the working style and restore their pristine glory, said Harpal Singh Cheema. To accomplish this task, Sikhs of Delhi were lucky to get a chance on Feb 26, they said.

He further said that Badals in Punjab have done grave damage to the Akali polity. The transformation of Shiromani Akali Dal under them from a Sikh party to a personal feudal fiefdom is complete and colossal. Badals proximity with the Sirsa dera is recent example how they have left the Panthic Marg and gone astray.

To a question, they said those who have abandoned Panthic Path (marg) must be taught a bitter lesson.

Taking a moral stand, Dal Khalsa leaders said resorting to populism in Gurdwara elections is not of good taste. “Populist measures should be kept for political polls”, said both.