The decision of demoetisation announced by the central government of India on 8th November 2016 had lead to detrimental effects upon all the economic sectors of the Indian sub continent but it is the Agriculture sector which is helplessly bearing the brunt of such a diabolic decision. For further details and knowledge of our readers  we are sharing this report on how an average farmer of the Sub continent is suffering due to this fall out.

The recall of the currency notes of higher denominations by the Central government  has sent wholesale vegetable prices crashing to rockbottom levels, bringing misery to millions of farmers hoping for good returns on their produce after two successive drought years. 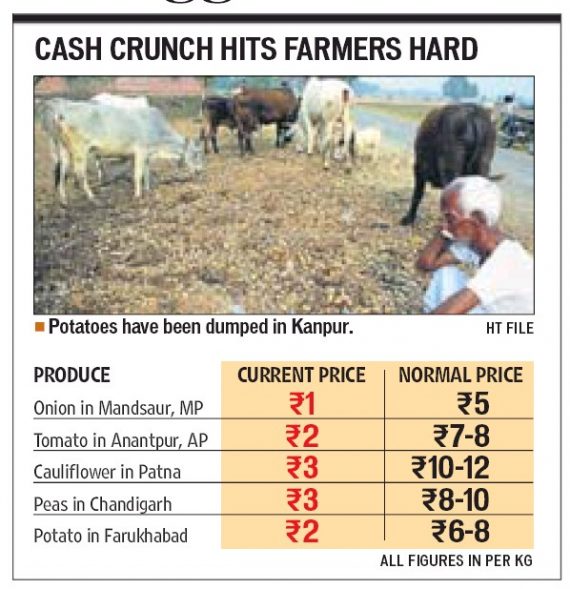 Reported by Hindustan Times (HT) Onions are selling for just `1 per kilogram in wholesale markets at Madhya Pradesh’s Neemuch and Mandsaur while tomatoes cost less than `2 per kg in Andhra Pradesh and Chandigarh.

A kilogram of cauliflower now fetches farmers just ` 3 in Bihar and potatoes cost `3-5 per kilogram in wholesale markets in Uttar Pradesh.

“I am ruined,”stated Prem Patidhar  a Madhya Pradesh farmer who sold his produce at one-fifth the production cost.

The steep fall has forced many farmers to discard their produce in Andhra Pradesh, Chhattisgarh, Madhya Pradesh and Uttar Pradesh as they could not recover even transportation costs. “Yes, the prices in the wholesale markets have crashed,” an agriculture ministry official admitted and  further added to his statement that the  reports of farmers discarding produce were “sporadic” and that the crisis would resolve soon.

“But ensuing the price crash, the final consumer is unlikely to ripe the benefits as rates have not come down drastically in the retail market moreover, an above-normal monsoon in most parts of central and northern India had fields sprawling with crops and farmers expecting to make up for the losses suffered in the last two year.

But they suffered a setback when the government recalled ` 1,000 and ` 500 notes on November 8, triggering an all India  cash crunch and a collapse in the demand for vegetables in wholesale markets. “The market is down by 30-50 % as consumer demand is low,” HT quotes  Parneet Singh at Delhi’s Azadpur Mandi,wholesale market, adding that average horticulture output was also more than normal. Compounding the problem is persistent refusal by truckers to ply on long routes such as Delhi-Mumbai as they don’t have enough cash to give to drivers, most of whom are semi-literate and cannot operate digitally. Also, traders are unable to pay fare in cash to truckers” media sources said.

While talking with the media persons Madhya Pradesh Kisan Ayog president Bansilal Gujar blamed the “demonetisation-induced cash crunch” as the prime reason for the price fall. “Earlier one trader used to lend cash to another trader but this practice has come to a halt as there is not enough money,”

S Raju, a farmer from the Anantapur district of Andhra Pradesh, who dumped two tonnes of tomatoes on Wednesday, said there were no buyers for the produce. “Our entire hard work has gone waste,” he added.

Nilkhand Yadav, a potato grower in UP’s Ferozabad, said the first “good crop” in five years was a waste.

Yadav and Raju are among India’s 118.6 million farmers, as per the 2011 Census — equivalent to the population of the Philippines. More than 80% of them are small and marginal whose lives run on the price they fetch for their produce.

As per the farm census of 2010-2011 a farmer with less than 2.5 hectares of land is categorised as small and with up to 5 hectares as marginal.

Devendra Sharma, an independent agriculture expert, termed the situation “worse than drought”, stating that farmers could seek compensation for a natural calamity but not for loss because of demonetisation. “I think farmers will take a lot of time to recover from the impact” he further added to his statment.