Chandigarh: Maoists have launched a “pamphlet war” against Centre’s demonetisation move in the districts of Madhya Pradesh and Chhattisgarh  and has given a call for “vigorous” mass movements against the decision. 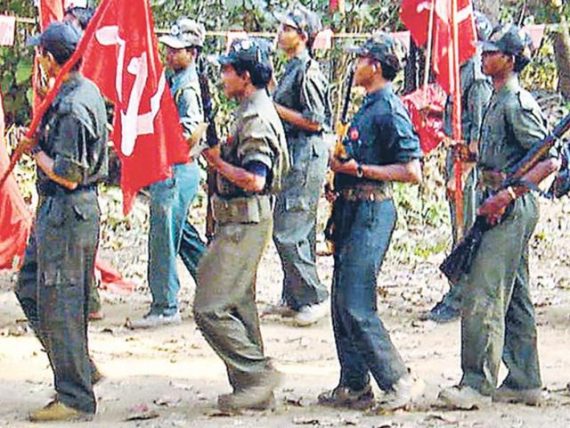 Maoists on the Move. [File Photo]

Media reports have referred to undisclosed police sources while reporting that the latest psychological-operation (Psyop) of the Maoists came to fore when security forces deployed against the Maoists in Balaghat district of MP, adjoining Chhattisgarh and Maharashtra, recently recovered a bundle of anti-demonetisation pamphlets in jungles along the state’s border with Chhattisgarh,

A report in Hindustan Times (HT) states that the Police firmly believe that the  pamphlets were left behind by the CPI (Maoist) cadres. The one page handout titled ‘Notebandi ka nirnay janta par sarkari hamla hai (Noteban decision is government’s assault on people) is ostensibly published by the CPI (Maoists)’s Gondia-Rajnandgaon-Balaghat (GRB) divisional committee.

The pamphlet reportedly further states that the Narendra Modi-led Central government’s November 8 decision to scrap banknotes of `500 and `1000 denominations was a dictatorial move” that overnight unleashed terror on 125 crores people of the Sub Continent. Mocking at the Prime Minister’s claim that the demonetisation struck a severe blow to Maoists, the pamphlet said it’s “revolution is the answer to the Brahminic Hindu-fascism fuelled capitalism of Modi.”

Furthermore the pamphlet stated, the demonetisation was an attempt by the PM to revive his party’s sagging electoral fortunes ahead of UP assembly polls. It said owing to the move small traders, daily-wage labourers, farmers and rural folks were under severe stress.

According to the Maoist  flyer, the Modi government’s move was promoting corruption instead of weeding out black money. “It has sprouted several new agents who are converting defunct currency with new notes for hefty commission,” read a pamphlet, adding most of these middlemen were BJP cadres. The move also helped money lenders to further loot the poor farmers by lending money at high interest rates and given an opportunity to police to threaten innocent citizens, it said.

Whilst addressing the media persons Balaghat, SP  Amit Sanghi said police was investigating the matter after being informed about the recovery of pamphlets. He further maintained that the propaganda was the manifestation of Maoist groups’ frustration over failing to change bulk of its defunct currency to new notes through villagers, local businessmen and private contractors.

Meanwhile, a senior I-T official in Bhopal said, “The department has no clear evidence of Maoists parking demonetised notes in Jan Dhan bank accounts. But at least 500 such zero balance accounts in different banks in MP and Chhattisgarh in which sums ranging between `50,000 and `3 lakh have been deposited since demonetisation are under its scanner.”