Denial of Justice for November 1984: Dal Khalsa to hold Rights and Justice March on Nov. 3

Amritsar: Blaming the Indian political establishment and justice system for failing the Sikhs from Nov 1984 massacre to Bargarhi-Behbal Kalan incidents, the Dal Khalsa will organize a ‘Rights & Justice March’ in the city on Nov 3.

Addressing the media spokesperson Kanwar Pal Singh and general secretary Paramjit Singh Tanda said the march would highlight the violence unleashed on Sikhs, denial of justice to aggrieved community and failure of international community in holding the Indian state accountable for the massacre of Sikhs. “Even the tainted cops responsible for Behbal Kalan firing incident is enjoying impunity under full political patronage”. 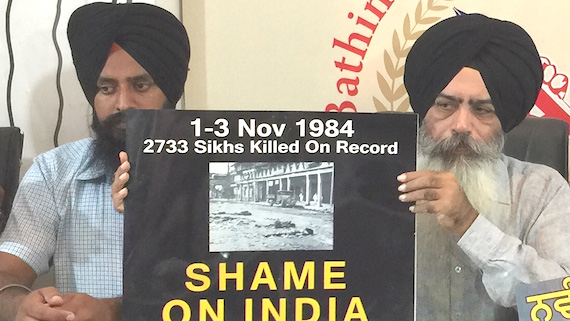 Calling Nov 1984 a big blot on the image of so-called largest democracy of world, they said it was state sponsored pogrom that had left deep scars on the psyche of Sikhs. They said lumpen elements in Congress and BJP played tandav with full impunity.

They said the failure of Indian justice system to deliver justice to victims of Delhi massacre in 84 paved the way for Mumbai killings in 92-93, Gujarat pogrom in 2002 and Orissa in 2008.

They made it clear that their community has lost all hopes to get justice from the (Indian) state. Hence, they would knock the doors of the United Nations to nail the perpetrators.

They said the march will begin from Bhandari bridge and culminate at Darbar Sahib where candles will be lit in memory of those who perished in the violence perpetuated by high and mighty of the Congress governing the country at that time.

They rubbished the Rahul Gandhi’s theory that his family and Congress party has nothing to do with the massacre of Sikhs.

Kanwar Pal said ironically India and its politicians want to mute the world. That is not possible. The tide has started to flow in the other direction. He referred the passing of a motion in the Canada’s Ontario state assembly and Pennsylvania in USA calling the mass killings of Sikhs in 1984 as ‘genocide’.