Amritsar: Dal Khalsa today warned the Sikhs from the RSS and BJP camp against politicizing 550th Parkash Gurpurab celebrations of Guru Nanak Ji by way of reducing Guru Sahib to the level of Indira Gandhi.

In a statement, the Sikh organisation asserted the demand made by some pro-RSS Sikhs to rename Indira Gandhi International Airport in Delhi after the name of Guru Nanak Ji amounted to reducing him to the level of a prime minister that was highly reprehensible. 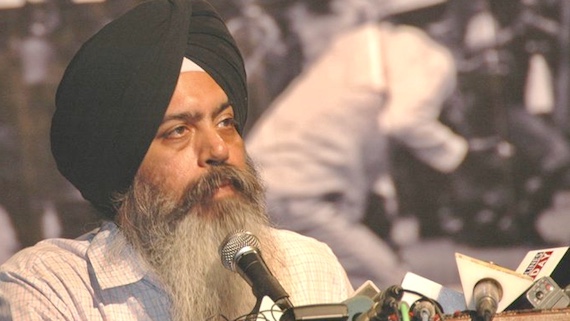 Party spokesman Kanwar Pal Singh slammed such Sikhs for stooping to this new low and dragging the name of founder of Sikhism for vested political interests. “It’s the height of sycophancy. Enslavement has entered into the blood and veins of certain dummy Sikhs”, he remarked.

Reacting to certain Sikhs meeting Prime Minister Narendra Modi in Houston to thank him for scrapping so-called blacklist, Kanwarpal Singh said there wasn’t a single known face present in the meet that represent Sikh community- be it at political or religious level.  Has anyone whose name was deleted from blacklist has come to thank Modi, he questioned?

He drew parallels of the meeting of this group of Sikhs with Modi   to the photo released to the media in which NSA Ajit Doval was shown having meal with some unknown Muslims in Kashmir after India scrapped article 370.