New Delhi:  In the wake of approaching death anniversary of  Burhan Wani a militant leader of Kashmir who was killed on July 8th last year by the Indian security forces the Union Home Ministry has directed its division and security agencies not to mention Burhan Wani’s name in any written communication, anticipating trouble ahead.

The government sources reportedly said that  he would be referred to as one of the militants killed in an encounter along with two others. A senior home ministry official explained, “For all future references, the incidents will be recorded as an encounter of three militants on July 8 and not Burhan Wani.”

”It is much safer as the government is not committing to anything even if at a later stage the information supplied regarding the name and the organisation to which the militant belongs turns out to be inaccurate.”

After a conversation with the officials it was being reported by media that the move  followed after the “glorification” of Burhan Wani not only within the Valley but also by Pakistan at international forums, including the UN, and by militant  groups based in Pakistan using Wani’s name on social media. More than 88 local youths were reported to have taken up arms following the unrest in the valley started after the encounter of BurhanWani on July 8 last year. 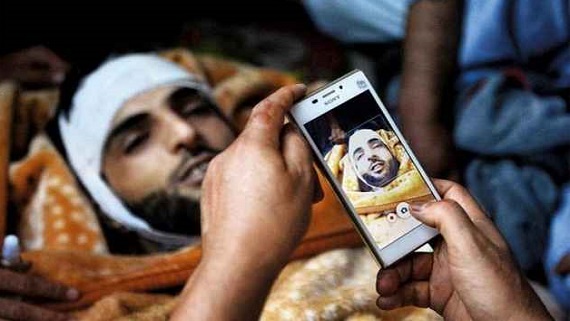 The union home ministry directed its officials not to make any reference to Burhan Wani’s name in replies of Parliament questions in the Rajya Sabha and the Lok Sabha, said officials, adding that they have even been instructed not to mention the Hizbul Mujahideen in any official communication or dissemination of information to public, including the RTI Act.

In a reported reply written to a Parliament question the minister of state (External Affairs) Gen (retd) V K Singh had mentioned Wani and stated, “In the wake of the death of Hizbul Mujahideen Commander Burhan Wani in an encounter on July 8, 2016, senior functionaries of the Government of Pakistan apparently addressed letters to United Nations (UN) Secretary-General, the President of the UN Security Council in New York and the UN High Commissioner for Human Rights in Geneva urging the international community to address the alleged human rights violations during protests in Jammu and Kashmir since July 8….”

It is said that Gen (Retd) V K Singh was replying to the question asked by Lok Sabha MP Supriya Sule, Rajeev Satav and others on August 10, 2016, nearly a month after the killing of Burhan Wani. Similarly, M J Akbar, the minister of state (External Affairs) in September last year mentioned Burhan Wani at a press conference in the permanent mission of India to the UN. Akbar was replying to Pakistan Prime Minister Nawaz Sharif’s speech at the UN General Assembly which referred Hizbul commander as a “young leader”.

The Home Ministry has made elaborate security arrangements and instructed the Jammu and Kashmir police and central security forces to remain vigilant ahead of Burhan Wani’s anniversary, reports the Indian Express (IE).