Senior Advocate Mohit Mathur and Manisha Bhandari represented the accused in the court. The court has called the investigating officer for his report and fixed the matter for hearing on July 20.

Both the lawyers argued before the Court and presented their respected cases by stating that the petitioners have already spent 35 years of their life in litigation and have already served one life sentence in Pakistan.

“The instant is a classic example of double jeopardy… their entire life will go facing trial after trial for one set of circumstance….their should end to their agony” they argued, adding further that “[d]uo were first tried for hijacking in Pakistan and sentenced thereafter they were again tried for same incident by Indian Court, and discharged now you can’t change the denomination and try for the same incident under a different name… it is per se illegal”. 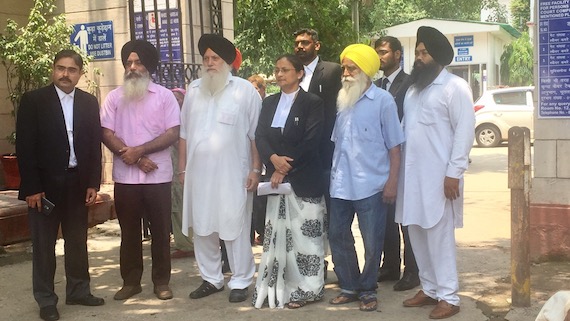 The Delhi police have filed a supplementary challan (fresh charge sheet) in Delhi court on 29 Sep 2011 under sedition charges, which asked the accused to appear before the court on July 18 for a fresh trail in 36 years old case.

Satnam Singh and Tejinder Singh went to Delhi High Court in Dec 2012 by way of criminal writ petition seeking the quashing of the supplementary chargesheet.

Accompanied the accused Dal Khalsa spokesperson Kanwar Pal Singh said There has been travesty of justice in the case of hijackers, against whom the Indian government has put them on trial after 36 years under “sedition charges”, ignoring their life imprisonment in Pakistan for the same offence.

As an afterthought in 2011, the Delhi Police has filed charges under sections 121 (waging war against Government of India), 121A (conspiring to commit certain offences against the state), 124A (sedition) and 120B (criminal conspiracy) of the Indian Penal Code against the five.

“We strongly take serious note of New Delhi’s move to upset the home and hearth of two of the five hijackers, Satnam Singh and Tejinderpal Singh, who have since returned to Punjab and are peacefully living a dignified life after their long and scary prison sentences. The other three hijackers, Gajinder Singh, Jasbir Singh and Karan Singh, are staying abroad because of the circumstances prevailing in India”, reads a statement issued by the Dal Khalsa.

It is pertinent to mention that Flight IC-423 was hijacked on September 29, 1981, to the Pakistan city after it took off from Delhi for Srinagar via Amritsar. The hijackers associated with Dal Khalsa demanded the release of Sikh preacher and head of Damdami Taksal Sant Jarnail Singh Bhindrawale who was arrested on Sep 20 the same year in a murder case.

The Court had ruled that they would face a fresh trial for other offences than those they had been earlier convicted of and sentenced to. The magistrate and the police has ruled that the principle of double jeopardy does not apply as the offences for which they were tried and convicted in Pakistan and for which the present charge sheet is filed are different. But since hijacking is a one – piece act, a fresh case under different offences amounts to violation of principle of double jeopardy and Geneva Convention.

The Sikh hijackers on Sep 29, 1981 hijacked an Air India flight from New Delhi to Srinagar and forced it to land in Pakistan. They demanded release of Sikh preacher Sant Jarnail Singh Bhindrawale, release of Sikh prisoners and compensation to Sikh demonstrators killed in police firing on Sep 20 at Mehta Chowk. They were arrested by Pakistan police and were sentenced life terms by a court there.

Satnam Singh is a senior leader of Dal Khalsa. He belongs to Paonta Sahib but presently resides in Chandigarh. After serving his sentence in Pakistan in 1995 , he went to USA where he sought asylum. However, his request for asylum was denied and he was deported back to India in the year 1999.

The fifth Sikh hijacker is Tajinder Pal Singh, who after serving his sentence in Pakistan had gone to Canada and filed a petition for asylum. He tried the same for 4 years but was deported back in 1998 after the rejection of his petition for asylum.

Gajinder Singh tried to move to Germany but was refused entry in the country and deported back to the country from where he came. He is in exile while Karan Singh a resident of Srinagar in Jammu and Kashmir and Jasbir Singh Cheema, a resident of Khanna in Punjab are said to be in Switzerland since 1995. Both have got asylum in Switzerland.