Sukhraj Singh and Mahinder Singh, the son and father of deceased Krishan Bhagwan Singh and Sadhu Singh father of another deceased Gurjeet Singh and grievously injured Ajit Singh met Chief Electoral Officer and expressed their concern, pain and resentment over the removal of the said officer under ECI’s directions. 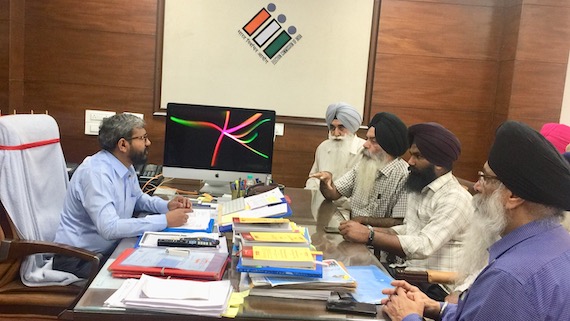 Speaking to the CEO, they asked him to forward their sentiments and protest to the Chief Election Commissioner Shri Sunil Arora. The delegation apprised the CEO that IG Kunwar Vijay Partap Singh had emerged as the face of the SIT as a result of his dedicated work and results that he had shown in arresting the two top guilty cops and removing him amounts to obstructing the course of investigation and dashing the hopes of the victim families in particular and the Sikhs in general had developed after the actions by the SIT.

Speaking to the media, Dal Khalsa spokesperson Kanwarpal Singh said that “in case the ECI does not review its arbitrary and hasty decision, people will lose faith in the ECI and there will again be a possibility of uprising and protests amongst the population in Punjab.

Human rights activist Jagmohan Singh, who had come to express solidarity with the victim families, posed a question to the CEO and repeated the same to the media, saying, “How often do you find that Sikh organisations stand for a police officer? Sikhs are standing by him because he has had the courage to arrest culpable senior police officers and raised hopes for justice amongst the victim families. The ECI’s reputation is at stake and in case they do not respond, it will have itself to blame.”