Edmonton (October 6, 2016): The World Sikh Organization of Canada has helped Sahib Singh Bains return to high school in Edmonton after he was told his kirpan was a weapon and would not be permitted in class.

Sahib Singh, 16, is an initiated or amritdhari Sikh and wears the Sikh articles of faith including the kirpan. Last week, a teacher noticed a bulge underneath Sahib Singh’s shirt. When confronted, he confirmed that he wears a kirpan. Sahib Singh was later approached by his school’s principal who told him that the kirpan is a restricted weapon and he would have to turn the kirpan over to him immediately.

In discussions with his principal and vice-principal, Sahib Sahib was offered the option of coming to school without his kirpan or turning his kirpan over to the principal every day in the morning and taking it back after school. He was further told that because the kirpan is considered a weapon, he may be expelled if he were found wearing it during school hours. 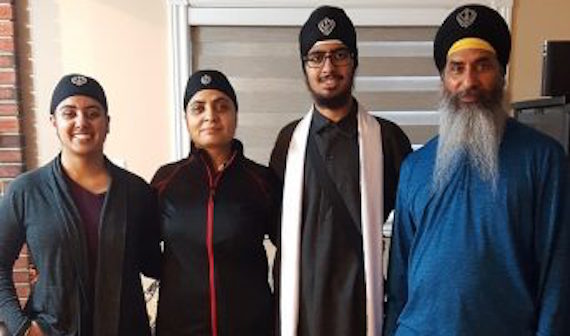 Sahib Singh and his family contacted the WSO for help. WSO’s legal team immediately sent a detailed letter to the principal and school board outlining the right of Canadian Sikhs to wear the kirpan as per the Supreme Court of Canada’s Multani decision as well as background material on the significance of the kirpan.

A meeting was arranged between Sahib Singh, his family and the school’s principals. A WSO representative also attended the meeting. The principals expressed their regret at not having been aware of the significance of the kirpan or the legal duty to accommodate Sikh students and asked for forgiveness for the inconvenience caused by their actions.

WSO Vice-President for Alberta Tejinder Singh Sidhu said, “We’re proud that Sahib Singh stood up for his rights and we are pleased we could help him return to school while wearing his kirpan as soon as was possible. It is important that whenever there is an issue involving religious discrimination those affected get the advice and assistance they need to resolve the situation. The WSO is proud to offer this assistance, free of charge, to all individuals.”

Sahib Singh said, “I’d like to thank the WSO for quickly stepping in and helping to resolve the situation. I was confused and disappointed when my kirpan was taken away but now I know that no other Sikh student will run into the same difficulty as me and we’ve made a positive difference out of what was a very negative situation. If anyone has trouble with their kakaars, I encourage them to go to the WSO for help.”