New Delhi: Authorities must ensure thorough, independent and impartial investigations into the deaths of 70 children at Baba Raghav Das (BRD) Medical College between August 10 and August 13 in Gorakhpur district in Uttar Pradesh, Amnesty International India said today. It must also take immediate steps towards re-assessing the functioning of the public health system to ensure that this does not happen again. 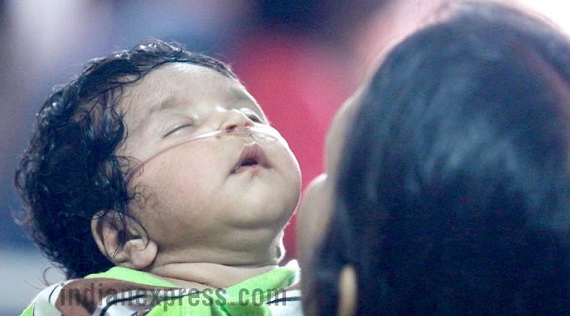 A large number of children admited at ICU for encephalitis treatment ,At least 30 children lost their lives due to encephalitis in last 48 hours at Gorakhpurs BRD Hospital after Supply of liquid oxygen was disrupted yesterday due to pending payment. Express photo

Several reports have alleged that these deaths were caused due to the disruption of oxygen supply to the hospital, because the state government had delayed payments of INR 6,90,000 to the sole oxygen supplier. The government has denied this claim, stating that the children died of encephalitis and other illnesses.

“The deaths of 70 children in a 5-day period in a government hospital is unconscionable. Serious allegations have been raised regarding delayed payments and disruptions in oxygen supply,” said Asmita Basu, Programmes Director, Amnesty International India.

“The government has an obligation to ensure that investigations are carried out in an independent and impartial manner, and that the families of the children who died can participate throughout the proceedings. The investigation must determine if there were any administrative or criminal liabilities, and those responsible must be held to account,” she said.

The inquiry should be conducted by persons appointed on the basis of their recognized impartiality, competence, and independence. They should have proven expertise in medicine, law, forensic science and other specialized fields relevant to the inquiry. They should take all steps necessary to find out what happened, including, where required, autopsies of bodies. To the extent possible, family members should also be consulted prior to an autopsy. The findings of the inquiry must be made public, without undue delay.

The National Human Rights Commission issued notice to the Government of Uttar Pradesh on 14 August, calling for “a detailed report in the matter of several deaths of children in the BRD Medical College, Gorakhpur, along with the steps taken for relief and rehabilitation of the affected families as well as action taken against the guilty officers within four weeks”. The National Human Rights Commission observed that the deaths amounted to a violation of the rights to life and health of those who died.

Several investigations have been initiated into the children’s deaths in Gorakhpur last week, including by the Indian Medical Association (a voluntary organization of professional doctors), the state police, the state government, and the Central government.

Amnesty International India remains concerned about the thoroughness and impartiality of these investigations. Media reports have stated that when families received the dead bodies, no post mortem had been conducted. The 3-member inquiry committee from the state includes the Health Secretary, the Finance Secretary and the Medical Superintendent of Sanjay Gandhi post-graduate Institute of Medical Sciences (SGPGI). The Health Secretary also heads the state  Health Mission, raising questions about the independence and impartiality of this investigation.

Furthermore, the findings of investigations released so far have shown serious discrepancies. The Central government inquiry found that the deaths did not take place due to a lack of oxygen. Simultaneously, a probe by the district administration found that 63 of these deaths were linked to a shortage of oxygen. A criminal complaint was also filed against the oxygen supplier.

According to reports, problems at BRD Medical College have been well known but no action was taken. In 2011, A Right to Information application filed to the Department of Pediatrics revealed that the BRD Medical College’s incubator, pulse oximeter and infant ventilators were out of order.

“These tragic deaths also reflect on the state of India’s public health system, and are an urgent wake up call to evaluate the functioning of public health facilities everywhere in the country,” said Asmita Basu, Programmes Director, Amnesty International India. “The government must take immediate steps to review all public health facilities, understand the long-standing problems and constraints they face, and take measures to improve the availability, accessibility and quality of healthcare”.

India has ratified several international human rights treaties that guarantee the right to the highest attainable standard of health, including the International Covenant on Economic Social and Cultural Rights (ICESCR), the Convention on the Elimination of All Forms of Discrimination against Women and the Convention on the Rights of the Child. These include the obligation to ensure that health care is available, accessible, and of good quality, and to ensure accountability for all violations of the right to health.

The Supreme Court of India has stated that “government hospitals run by the state are duty bound to extend medical assistance for preserving human life. Failure on the part of a government hospital to provide timely medical treatment to a person in need of such treatment, results in violation of his right to life guaranteed under Article 21.”