Connecticut, USA: US Congressman Joe Courtney has said that “excessive response” to farmers protest in India by the government of India was “worth of condemnation”. While responding to concerns raised by Swaranjit Singh Khalsa, directory of Sikh Art Gallery, Joe Courteny said: “protests by many within India’s agricultural community have drawn worldwide attention after India’s Parliament enacted major legislation last November that sought to bring structural change to the country’s agricultural sector. In the time since, mass protests have ensued out of concern that the new law allows for an exploitation of farmers within the industry by larger firms, and that there was an overall lack of consensus built before the new law was enacted”.

“While the implementation of the new laws was suspended after an Indian Supreme Court ruling, protests continued and unfortunately led to a spark in destructive actions. This spark has led to an unacceptable use of force and crackdown by Indian authorities, with the arrest of journalists and activists, and far-reaching internet shutdowns. Such an irrational response has led to raised concerns that the government continues devolve in its respect for human rights by engaging in repeated suppressive behavior”, said he. 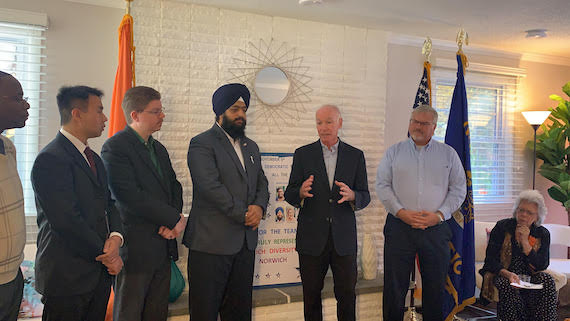 “I find this most recent excessive response concerning as any government activity that infringes upon what ought to be the right of peaceful assembly is worthy of condemnation”, he added.

“While Congress has yet to take any specific action of disapproval against the Indian government on this matter, please be assured I will keep your views in mind and continue to follow this situation as it develops further”, said US Congressman.

Swaranjit Singh Khalsa on this statement said “I am glad that our congressman not just condemn Indian Govt. Suppression but understand that India has history of using excessive force repeatedly against peaceful protesters.

He said “We must remain vigilant as India has impulse of committing genocides to suppress voice of dissent.”

Swaranjit Singh Khalsa gave historical background and said “India is known for suppressing voice of people and we should not forget that India responded with committing crimes against humanity like June 1984 Attack on Darbar Sahib and November 1984 Sikh genocide when peaceful protests of late 1970’s were lead by Sikhs for equal rights and for state rights of Punjab which were promised to them in 1947 when India got its independence”.