Chandigarh: On the call of All India Kisan Mahasangh, an umbrella body of 110 farmers’ organisations across Indian subcontinent, protesting farmers are blocking the supply of farm products such as grains, vegetables and milk across India to attract government’s attention towards the rampant agrarian crisis and farmer distress.

The protest entered its third day on Sunday and the supply of milk and vegetables is likely to be affected in various parts of the region due to the agitation. 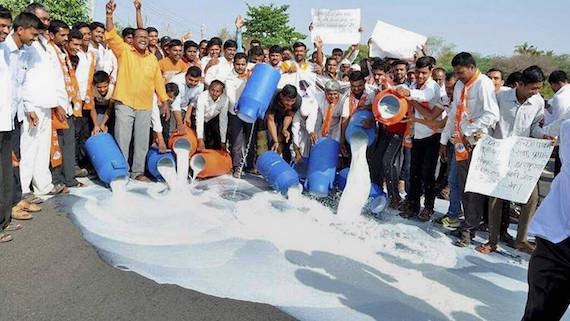 Ahmednagar: Farmers spilling milk on the road during their state-wide strike over various demands at a village in Ahmednagar, Maharashtra on Thursday

On Saturday, clashes broke out in parts of Punjab between protesting farmers and traders, and the supply of milk and vegetables was hit in some areas. Business was affected in many markets of Rajasthan, too, as nearly 150 trucks carrying vegetables and fruit were stopped from entering Muhana Mandi, the state’s biggest wholesale market, and prices rose in wholesale markets.

India’s central Agriculture Minister Radha Mohan Singh said on Saturday that the protest by farmers in various parts of the country were attempts to get media attention, triggering demands by opposition parties for his removal, reports PTI. Singh said the farmers opted for “unusual deeds” to draw media attention as they belong to organisations with only a few thousand members.

Before Radha Mohan Singh, Haryana CM Manohar Lal Khattar had said that farmers “don’t have any issues, they are just focusing on unnecessary things, not selling produce will bring losses to farmers”.

Punjab CM Capt. Amarinder Singh has criticised Radha Mohan Singh’s remarks on farmers’ protest. He said that it was not the farmers’ agitation but the reaction of Minister Radha Mohan Singh that is bizarre. He demanded dismissal of the Central Agriculture minister over his alleged total lack of concern for problems of distressed and desperate farmers.

Police use force against Farmers in Bathinda: 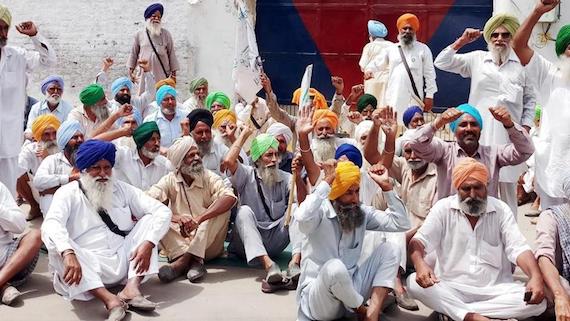 Several farmers’ organisations have jointly called a 10-day protest across the country demanding remunerative prices for their produce, implementation of the Swaminathan Commission recommendations and farm loan waivers, among others | Source: HT

A farmer was reportedly injured when police used force on protesters who were trying to stop dairy owners from supplying milk to urban areas near Jodhpur Romana village on the Bathinda-Dabwali road on Saturday.