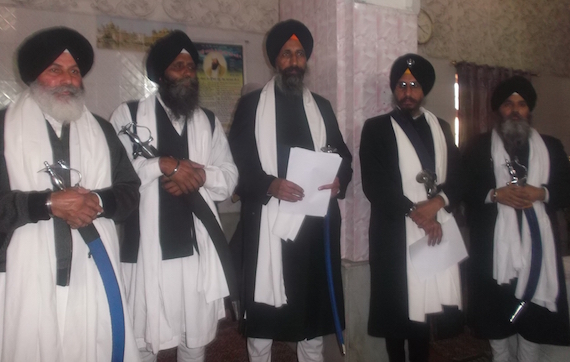 It was after the joint strong protest by various pro-freedom Sikh groups and the Sikh Sangat that SGPC backed  Giani Gurbachan Singh  had to revoke its September 24, 2015, decision to exonerate Dera  Sauda Sirsa  head Gurmeet Ram Rahim in the 2007 blasphemy case.

“We have no regrets over our stand. The CBI court had presented an exemplary verdict to punish the Dera Sirsa head, but our Takht heads have damaged the sanctity of Shri Akal Takht by pronouncing the politically influenced decisions,” reads the statement of Satnam Singh Kanda one of the former ‘panj pyare’ published in an English tabloid.

“The Sikhs are dedicated to Shri Akal Takht Sahib, but the controversial decisions confuse them. The nominated Takht heads play in the hands of political leaders, whereas the ‘parallel’ ones seldom enjoy any recognition. The need of the hour is to join the Sikhs with the panth with requisite principles and tenets,” he adds.

Meanwhile, Tarlok Singh while interacting with the media stated that “Though we have been dismissed from services, but we have dedicated ourselves to performing our duties of conducting amrit sanchar ceremonies. Till date, we must have performed the ceremony on 5,000 Sikhs,” he said.