As reported by the media the meeting took place in the chamber of Patiala Central Jail superintendent and was kept a secret till Bhai Balwant Singh Rajoana’s sister Kamaldeep Kaur shared its picture on social media. 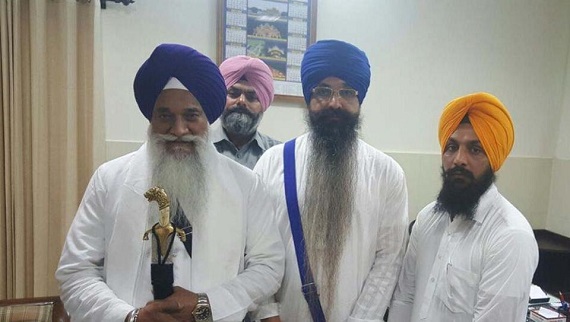 While quoting anonymous sources the media reports further said that the the Shiromani Gurdwara Parbandhak Committee (SGPC) had asked Giani Gurbachan Singh to meet Bhai Balwant Singh Rajoana anticipating that he may resume his hunger strike to demand quick decision on his  petition for reconciliation.

“The meeting has taken place a month after SGPC president Kirpal Singh Bandungar promised to take up his case with the President of India. Balwant Singh Rajoana had been on hunger strike inside the jail and had to be hospitalised. He wanted speedy decision on the reconciliation petition filed by the SGPC with the President, when his death warrants were issued in March 2012. As of now, the SGPC has not pursued the matter. Sources said during his meeting with  Giani Gurbachan Singh, Balwant Singh Rajoana took up the matter of release of Sikhs languishing in various jails besides raising his own issue”, reads a quote from the news report published in the English vernacular.

The Giani Gurbachan Singh reportedly assured him that the SGPC will lead a delegation to the President of India besides raising the issue on various political fora and also with the judiciary.