Amritsar: Demanding a complete ban on controversial film Nanak Shah Fakir, a demonstration was organized by students of Guru Nanak Dev University in which the students told the producer Harinder Sikka to withdraw the film. 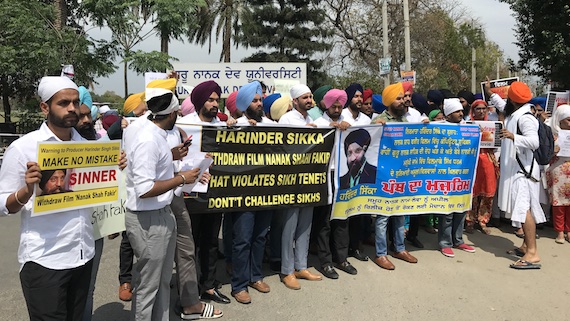 Students blamed Badal family for the present crisis that has engulfed the community. They alleged that former Punjab Deputy CM and SAD (Badal) president Sukhbir Singh Badal and his wife Harsimrat Kaur Badal were solely responsible for giving go ahead to film with SGPC doing their bidding. Students urged the Akal Takhat to issue edict against the producer .

The youth leader Paramjit Singh Mand, President of Sikh Youth of Punjab, said that the interim order by the Supreme Court of India in favor of the film is unfortunate, which has been done without understanding the Sikh sensitivity. He said that distortion and violation of Sikh principles can not be tolerated under the guise of individual liberty.

Paramjit Singh Mand, appealed to the state governments, especially Delhi and Haryana, that they should not allow the film to be screened within their respective states.

Student leaders who led the protest, said that the decision by the Punjab government not to ban the movie reflects that the Indian mainstream political parties have no regard for the Sikh religious tenets and values.