Gangtok: As per the media reports the local Municipal authorities on Monday forced evacuated Gurdwara Dangmaar Sahib and piled up all the belongings of the Gurughar including the saroops of Guru Granth Sahib Ji in the middle of the road.

The Gurudwara Sahib is located in North of Sikkim on the bank of lake Dongmaar. Being close to Ind0-China border and having rugged terrain and limited means of access in Tibetan plateau it is maintained and managed by the Indian Army check post at Giagong. The building of the Gurudwara Sahib was build during early 1990’s after a brief dispute between the Sikkim government and the Indian Army, but instead of being a Gurdwara ended up as ‘Sarwa Dharma Sthal’.

It is widely speculated by the local Sikh sangant that the Sikkim government has forced evacuated the Gurdwara Sahib so that the building of the Gurughar could be demolished. It is also said that the local administrative authorities are planning to build a Buddhist monastery in its place. 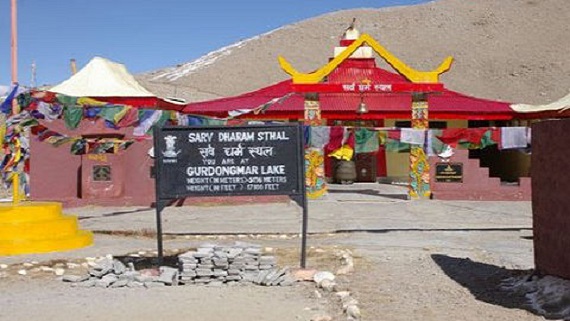 The Shiromani Akali Dal (Badal) chief Sukhbir Badal has reportedly urged the Union Home Minister Rajnath Singh to get the incident of forced removal of Guru Granth Sahib Ji from the precincts of Gurdwara Gurudongmar in Sikkim to another place inquired.

Furthermore, Shiromani Gurudwara Prabandhak Committee (SGPC) chief Prof Kirpal Singh Badhungar while interacting with the media in Fatehgarh Sahib on Tuesday said that the beadbi of Guru Granth Sahib and the locking of the Gurdwara Sahib in Sikkim were unfortunate incidents. “The SGPC will seek time from the Indian Army Chief and the Indian President to apprise them of the incidents,” he adds.

On the other hand the Delhi Sikh Gurdwara Management Committee (DSGMC) President Manjit Singh GK while addressing the media in press conference stated that “the forced removal of belongings of the Gurdwara Sahib by local SDM was unfortunate, and in contravention to Sikkim government’s notification issued in September 1998 on preserving those religious shrines which are more then 100 years old.”

It is also learned that Manjit Singh GK may approach Buddhist spiritual leader Dalai Lama if needed to  resolve this matter.