Washington: Gurdwaras in California have offered shelter to thousands of evacuees of Yuba City following fears of Oroville Dam collapsing. 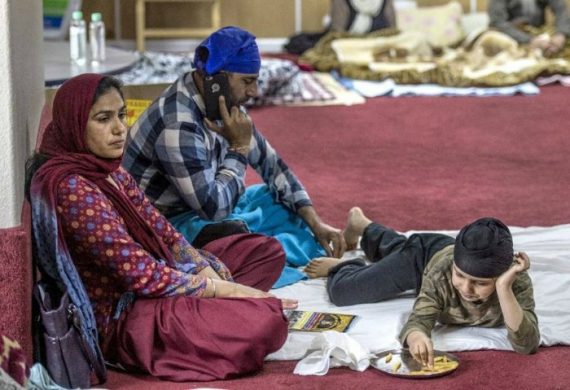 A Family evacuated from on going Oroville Dam crisis.[Photo by Google.]

“More than 200 evacuees received toiletries, bedding and meals served by the temple staff of 19, who worked through the night to house everybody,” temple manager Ranjeet Singh was quoted a saying by the Sacramento Bee.

“People were still arriving after being stuck in traffic for seven hours,” Singh said, adding, “We have a big facility here. We can accommodate 300 to 400. If anybody needs help, we can provide it. Everybody’s welcome here,” he added.

“Gurdwaras in the Sacramento region are open for people evacuated around #OrovilleDam. Am told they have food ready and all in need are welcome,” Steinberg tweeted.

According to Harjinder S Kukreja, a Ludhiana-based social activist, the Yuba city-Marysville area is home to more than 40,000 Sikhs and Sacramento alone has over 70,000 Sikhs and the efforts made by the Sikh community there will bring them much closer to other communities. “The Sikh model justice is rooted in love. I wish more people should understand the spirit of turban,” said Kukreja.

The West Sacramento temple complex is believed to be the largest evacuation shelter in Sacramento as nearly 200,000 people fled the zone beneath the Oroville Dam. The Sacramento Sikh Temple in Rio Linda reported taking in 50 to 60 families fleeing the flood zone, it reported.