New Delhi: A book titled ‘Gyarah Saal Salakho Kay Pichay’ written by Mufti Abdul Qayyum who had spent 11 years in jail for no crime provides first hand insights of the repressive policy adopted by Indian state against the Muslims of the sub-continent and implicating them under fake terrorism related charges.

Whilst interacting with the media during the release of the book way back in May 2015 Jamiat Ulama-i-Hind (A) President Maulana Arshad Madani strongly demanded “stern action” against police and civil officials and agencies who have involved in arresting innocent persons on false terror charges. He also urged the central and state governments to give adequate compensation to those acquitted by courts as their lives have been ruined due to false cases.

“The central and state governments should take stern action against the officials and agencies responsible for destroying innocent lives under the bogey of fight against terror. There are several hundred people languishing in jails for terror acts which they never committed”.

Furthermore, he said as many as 450 Muslims are lodged in prisons across the country for spans as long as 18 years on terror charges that have not been proven.

Maulana Madani categorically demanded that ”Compensation should be paid by the central and state governments to the persons who were acquitted of false terror charges and their innocence was proven by the courts. There should be justice for those whose lives were destroyed due to conspiracies hatched by officials and agencies.”

Moreover, outrightly accusing communal elements in the system for jailing innocent Muslims on trumpeted terror charges, Maulana Madani said there is need of concerted efforts for weakening communal forces which have been trying to vitiate peaceful and harmonious atmosphere in the country. 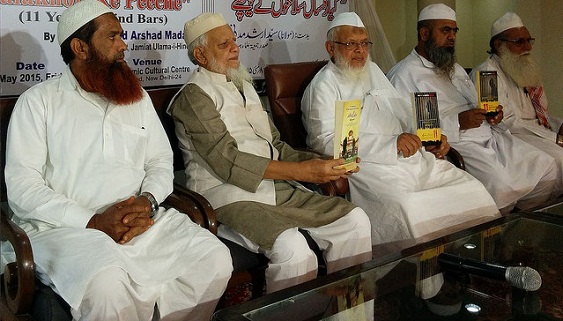 Furthermore, he criticised BJP and its mentor RSS for spreading communalism in the country saying such elements are also spread across other parties including Congress.

“I remember that it was during the time of former Union Home Minister Shivraj Patil, when Muslims were immediately accused of any incident that happened in the country,” said Maulana Madani.

Replying the question related to providing assistance to such people lodged in jail on fake charges he said ”I met Congress Vice President Rahul Gandhi a couple of times on the issue, and they were chalking out plans to provide relief to such people before the party lost power at the Centre.”

“I have personally submitted a report on Dabhil riots to Union Home Ministry but it did not even acknowledge the report and everybody knows  that what has had  happened with the Christian leaders’ delegation,  then why I will get humiliated by meeting the PM,” he said.

It was specifically pointed out by Maulana Madani that the Gujarat Government did not allowed the book launch function that was scheduled be released on April 16 2015 in Ahmadabad, he further said that it served no purpose as more people will now know about it and read it as it has been now released in the Indian capital city of New Delhi.

The scribe of the book while talking with the media persons shared his experience and said that he was implicated in the case to hide real culprits. Police ‘produced’ two letters from bodies of assailants to implicate him.

“The surprising thing was that the bodies of the terrorists were riddled with bullets. One was hit by 48 bullets, while other by 56 bullets, but the letters recovered from them were fresh – without any wear and tear or bloodstains. The Supreme Court immediately understood that I was falsely implicated,” he said.

Exhorting for communal amity in the country, Mufti Qayyum said his case was fought by three non-Muslim lawyers and the two judges who acquitted him were also non-Muslims.

On his tribulations and ordeal, he said he had never lost faith in Almighty Allah and had never dejected.