New Delhi: After remaining part of the Aam Aadmi Party for past four years, Senior Advocate and Dakha MLA Harwinder Singh Phoolka said that converting anti-corruption movement led by Anna Hazare into a political party in 2012 was a wrong step. He was referring to formation of Aam Aadmi Party by Arvind Kejriwal. Phoolka had joined AAP in 2014 before Lok Sabha elections and he had unsuccessfully contested Lok Sabha election in 2014 before being elected as MLA from Dakha in state assembly elections held in 2017.

It is notable that Advo. H S Phoolka had announced to quit the Aam Aadmi Party on Thursday (Jan. 3). He has already submitted his resignation as Dakha MLA to the speaker of Punjab state assembly. 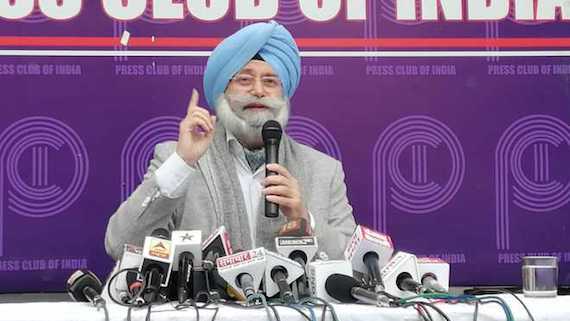 Disclosing reasons for quitting the Phoolka held a press conference in New Delhi yesterday (Jan. 5). Addressing reporters during this press conference, H S Phoolka said there is a need to form a movement like the one started by activist Anna Hazare in 2012 and that many who have left the AAP and others, including lawyers and doctors, need to unite to form an organisation parallel to political parties.

“Converting anti-corruption movement into political party in 2012 was wrong,” he said, adding, “I will not contest Lok Sabha election although after the conviction of Sajjan Kumar, people in Punjab said I could easily win from any seat.”

Congress leaders Kamal Nath and Jagdish Tytler are yet to be brought to book and this battle will be fought through a common platform, he added.

He said that there was the need of an organisation at religious level to free SGPC from corrupt regime. He said that he will not fight SGPC elections but will make efforts to for the required organisation to improve the management of the Sikh body.