Chandigarh: The Punjab unit of Aam Adami Party (AAP) here on Tuesday while addressing a press conference has accused the Congress government of continuing the Badal Dal halka in-charge system in the state, claiming that losing Congress candidates were throwing their weight around in district administrations.

Furthermore, AAP MLA from Talwandi Sabo maintained that Congress leaders in her constituency were going around claiming that they had got grants from the CM which they will use for public works, even though they had no authority to do so. 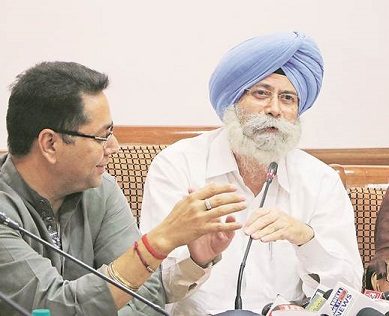 “The losing candidates are also throwing their weight around in the municipal corporations and councils and are often found to be browbeating the office-bearers of these local bodies,” said Baljinder Kaur. Ropar MLA Amarjeet Singh accused the losing Congress candidate in his constituency of being involved ‘goonda tax’ being imposed on the sand being transported from Nurpur Bedi, reports the Indian Express (IE).

Further talking about the bill party’s vice chief Aman Arora said that  MLA Local Area Development Fund has been introduced in many states which is similar to that of MPLAD Fund introduced by government of India in year 1993. He demanded that fund of Rs. 3 Crores per constituency must be provided in the state’s Plan Budget every year to meet the demands of the people of state.

In addition he said that  at present along with Members of Parliament, MLAs of Assam, Arunachal Pradesh, Madhya Pradesh, Maharastra, Kerla, Karnatka, Delhi etc are getting 2-4 Crores Rs. Fund under MLA Local Area Development Fund but the concept has not implemented in Punjab state. He said that Delhi Vidhan Sabha has passed the bill to raise the fund to 14 crores that is waiting the nod of Lieutenant Governor of Delhi.

Moreover, Aman Arora stated that  he has written a letter to the Speaker of Vidhan Sabha in this regard to seek his permission to introduce private member bill in coming session of Vidhan Sabha.