Chandigarh: Amnesty International India has maintained that its’ interactive website ‘Halt the Hate’ has found that reports of alleged hate crimes have witnessed the steepest rise in numbers since 2016.

“For India to be committed towards ending hate crimes – where people are targeted because of their identity stemming from race, religion, caste and gender amongst others, it is essential for the country’s penal laws to first recognise the bias behind the commission of such crimes and document the occurrence of such incidents – both of which remain conspicuously absent currently,” said Aakar Patel of Amnesty International India. 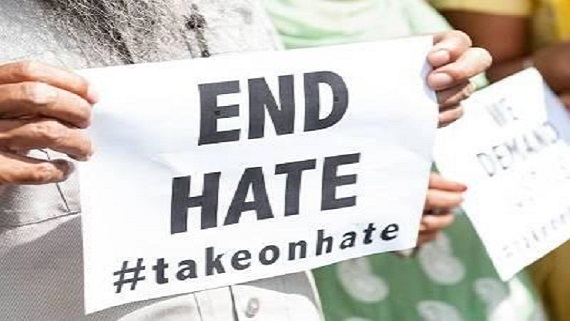 In the absence of any publicly available disaggregated data on hate crimes, Amnesty International India launched its website Halt the Hate in September 2015, with the aim of documenting incidents of alleged hate crimes in India after Mohammad Akhlaq, a 52 year old Muslim resident of Dadri, Uttar Pradesh was murdered on the suspicion of eating beef. It scours the English and Hindi media for reports of hate crimes, collates them on its Halt the Hate website and classifies them on the basis of how violent were they, who were they directed at and what was the alleged motive behind the commission of such a crime. From September, 2015 to June, 2019, Halt the Hate has recorded a total of 902 reported hate crimes in India. A total of 181 incidents of alleged hate crimes were recorded between the months of January and June this year. In 37 reported incidents, the victims were killed.

Between January and June 2019, over two-third of the victims suffered harm on account of their Dalit identity followed by their Muslim (40), Adivasi (12), Christian (4) and their actual or perceived sexual orientation or gender identity (6). Some of the alleged hate crimes against Dalits related to denial of access to public property such as roads, water, crematorium, schools etc. Cow-vigilantism related hate crimes and honour killing were reported in 17 cases.

Many victims were simultaneously targeted for their intersecting identities. To illustrate, 58 reported hate crimes were directed at women who identified themselves as either Dalit, Muslim, Christian, Adivasi or LBT (Lesbian, Bisexual and Transgender) persons. In 30 of these incidents, women were either raped or sexually assaulted. Similarly, in the aftermath of the suicide bomb attack in February 2019 in Pulwama where 42 members of the security forces were killed, 14 incidents of mob attacks on Kashmiri Muslims were reported, mostly targeting small-time traders from Kashmir across the country. With 37 alleged hate crimes, the month of February also saw the highest incidence of hate crime reports in 2019 followed by 36 in March.

“Unfortunately, the true extent of hate crimes in India is unknown because the law – with some exceptions – does not recognize hate crimes as separate offences. As a result, government data on discriminatory motives behind crimes remains missing. The alarming rise of the alleged hate crimes clearly indicates that lack of implementation of the Supreme Court guidelines begets lack of accountability and rising impunity,” said Aakar Patel.

Even though the Supreme Court highlighted the need for a concrete definition of ‘lynching’ as a form of vigilantism in July 2018 and directed the state governments to put in place certain preventive, remedial, and punitive measures to combat mob violence, only Rajasthan and Manipur have passed designated legislation. On the other hand, the central government maintains that state governments are competent to enact legislation criminalizing mob lynching. In the absence of any specific laws, these incidents are booked under various legal provisions such as ‘rioting’, ‘unlawful assembly’, ‘murder’, ‘criminal intimidation’, ‘intentional insult with intent to provoke breach of peace’ etc., which dilutes the gravity of the offence and renders the statistics inadequate as well as misleading.

Incidentally, the National Crime Records Bureau (NCRB) which publishes annual statistics on the incidence of crime has not released its Crime in India Report since 2016.

“To address hate crimes, it is imperative that disaggregated data including the type and nature of the crime be recorded at all levels, including reporting, investigation, prosecution and sentencing. It is imperative that the authorities investigate suspected hate crimes promptly, impartially and thoroughly. The prosecuting authorities must consistently bring alleged discriminatory motives to the attention of the court when there is sufficient evidence to do so. Importantly, there must be public denouncement of hate and hate crimes, starting with our political leaders,” said Aakar Patel.