Kent, WA (March 5, 2017): A Sikh man (who has chosen to remain anonymous) was shot and injured late Friday in Kent, Washington. According to news reports, the gunman – who is still at large – told him to “go back to your own country.”

The Sikh Coalition, a US based civil rights group, has urged the local police department has confirmed that the shooting is being investigated as a potential hate crime. 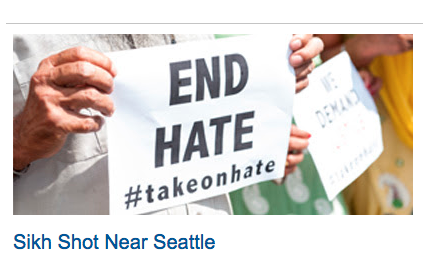 This shooting is the latest in a string of attacks on minorities throughout the country – including bomb threats to Jewish community centers, arson attacks on mosques, and the murder of Srinivas Kuchibhotla, an Indian-American engineer who was told “get out of my country” before being shot along with two others in Kansas last month.

As per an update from the Sikh Coalition, the civil rights body has written to local, state, and federal officials urging them to conduct a thorough hate crime investigation; improve laws and regulations relating to bias prevention; organize Know Your Rights forums to build resilience in targeted communities and partner with Sikh Americans to expand Sikh awareness and appreciation.