Amritsar: The Punjab and Haryana High Court recently summoned the Chief Secretary of Punjab Government to appear on May 8 with all documents of Corridor Sundrikarn Project. The project was launched in 1988 under the garb of providing beautiful appearance to Sri Harmandir Sahib Complex, but it concludes up with a big fraud.

The High Court reportedly took strict notice of alleged finicial frauds in this project and asked the Punjab Government to clarify about it. PUDA Administrator and Director of Corridor Project Sandeep Rishi had disclosed this information publicly four months ago. 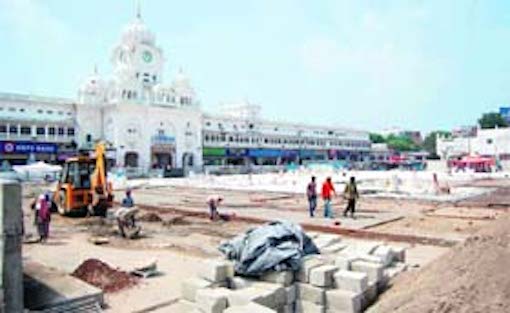 Petitioner Sandeep Mahajan has maintained that the SGPC was acquiring the land for corridor and the buildings of Langar Hall and Sri Guru Arjan Niwas has been also extended “without any permissions”.

Sandeep Mahajan, in his petition, has maintained that the Corridor project was launched in 1988 under label of ‘Sundrikarn’ with motive to reorganize the area surrounding the Darbar Sahib complex to ‘control activities of militants’. He said that 500 houses and 1150 shops were destroyed in this project affecting 829 families.

This project was stopped during the days of Sikh armed struggle in Punajb and it was restarted in 1997. Houses and shops were vacated up to 500 meters of the Darbar Sahib complex and the owners were paid four times of the market value.

As per media reports Sandeep Mahajan got this information under Right to Information Act (RTI). He appealed the Home Minister of India to take action against this ‘illegal acquiring’ of the land by SGPC.

The corridor has been divided into five parts, fourth and fifth parts of which are still under construction. Punjab Government has erected a plaza in front of Ghantaghar entrance of Darbar Shaib, that is nearing completion.

Deputy Chief Minister of Punjab provided shops to the affected shop-renters in newly erected market, but Vaid Tejinder Singh & Sons had challenged his decision in court. They demand the open sale of shops in newly erected building.

Shops have been built in the corridor according to plans placed by architects, but some shopkeepers with political patronage allegedly broke walls of shops to merge two shops into one. Role of district administration is also under serious questions in this case.