Shimla/Chandigarh:  Himachal Pradesh in its assembly election witnessed a record 74 percent of voter turnout. It is said that the hill state recorded more than 74 per cent voter turnout by 5pm on Thursday, with Election Commission stating it to be highest ever recorded since the inception of the state in 1966. 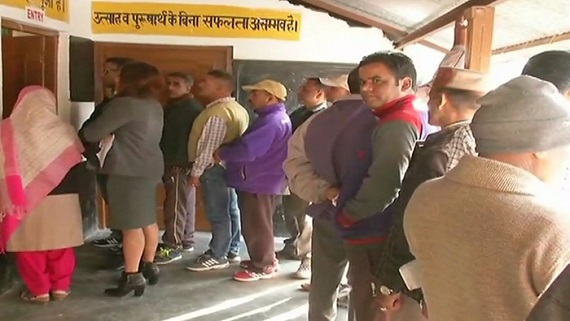 Voters waiting for their respective turn.

In 2003, the state had recorded 74.51 per cent turnout. Polling in 68 assembly constituencies began on a slow note due to cold, but picked up by the end of the day. In the remote Spiti sub-division of tribal Lahaul-Spiti district, 100 per cent voting was registered at Ki polling station while overall polling percentage remained at 80.43 per cent with a high number of women coming out to vote, media reports said.

It is said that the district of Hamirpur recorded lowest turnout at 69.5 per cent whereas Sirmour recorded higest around 82 per cent. Some of the districts that recorded high voting were Solan (77.44 per cent), Doon (88.95 per cent) and Nalagarh (84.27 per cent). In Kullu, around 80 per cent polling was recorded.

Interestingly, chief ministerial candidates of both the BJP and the Congress — P K Dhumal and Virbhadra Singh — could not vote for themselves because they were not contesting from their home constituencies, reports The Times of India (ToI).