Even on Saturday (January 31), the state capital witnessed protests by BJP activists who demanded dismissal of the state government and accused the Shimla police of shielding the Youth Congress activists. 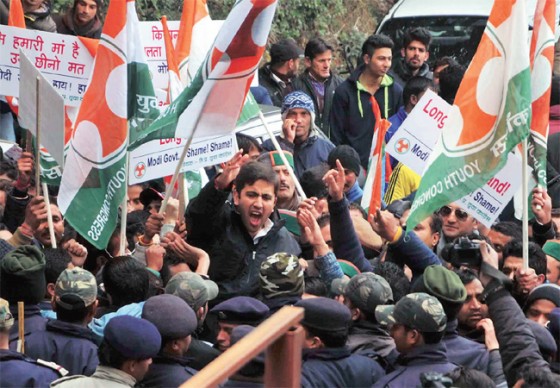 Youth Congress activists protest outside the BJP’s office in Shimla

Although the state government has ordered a magisterial probe into the incident, Kalyan Singh, who assumed additional charge as Governor of the state a day before the incident, made his presence strongly felt.

“Organising dharnas outside the office of a party is not appropriate in democracy. The incident has raised big questions on the law and order situation in the state. The government should so something. I will do whatever is possible within the constitutional framework,” Kalyan Singh said.

The clash broke out after Youth Congress activists led by Vikramaditya Singh, CM Virbhadra Singh’s son, protested outside Himachal BJP office in Shimla against the ordinance brought in by the NDA to amend the Right to Fair Compensation and Transparency in Land Acquisition, Rehabilitation and Resettlement Act, 2013.

Meanwhile, BJP leaders, including former CM and Leader of Opposition Prem Kumar Dhumal, submitted a memorandum to Kalyan Singh, who assured action in the matter.

Dhumal said, “Youth Congress activists have attacked the BJP office and workers which is against democracy.”

Terming the protest an attack, the BJP lodged an FIR against Youth Congress president Vikramaditya for planning it. However, a cross FIR was registered by the Youth Congress. “When we reached there, we were astonished to see BJP workers armed with sticks and stones. There was a clash and people from both the sides were injured,” Vikramaditya reportedly told media.