HSGPC issue stuck in court, Political focus back on burning issues of Punjab

Chandigarh/ Punjab (July 30, 2014): Senior Punjab journalist I.P. Singh in one of his recent news with Times of India has pointed out that [w]ith the issue of Haryana Sikh Gurdwara Management Committee (HSGMC) going to the court, the focus is back on matters confronting the Punjab government within the state, including byelections for two assembly seats on August 21. 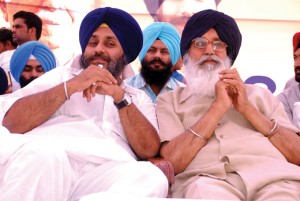 “As the tussle for control of Haryana gurdwaras dominated the political discourse in Punjab, real issues of the state were relegated to the backburner for about two weeks”, a news published by reads.

“With this, the hitherto dominant SAD has now to contend with its more assertive partner BJP that has sought concessions for urban sections, especially traders and industrialists, sources said”.

“BJP legislators, including ministers, had expressed support for the business lobby on the issue of notification of Punjab VAT Act, who had been opposing the new law. This forced Punjab deputy chief minister Sukhbir Singh Badal, who heads the excise and taxation department, to order withdrawal of the notification on Tuesday, a day before the scheduled “dharna” of traders and manufacturers in front of excise department office in Jalandhar”.

“The trader lobby had sent written invites to BJP MLAs to participate in their dharna. Sources revealed that unlike the earlier manner of persuasion and pleading with deputy CM on matters related to taxation, BJP leaders did plain speak and adopted a tough stand, sources said. The SAD-BJP alliance was also worried as business leaders had threatened to go against it in the byelections, especially in Patiala city, which is an entirely urban constituency. Another matter that could test the ruling combine in the coming days, especially before the bypolls, is the high cost of sand and its illegal mining”.

“Voices against property tax have once again started getting louder after the “Panthic” issue — which was the prime concern of the Punjab CM and deputy CM – has now gone to court. The issue of development in illegal colonies after thousands of plot holders deposited regularization fee has also started hogging the limelight. Rains over the past few days have also turned focus on the shortfall in power generation in Punjab as both domestic and commercial consumers faced long and unscheduled cuts leading to widespread resentment, sources added”.

Note: Above write-up is primarily based on “Haryana Sikh Gurdwara Management Committee row in court, spotlight back on burning issues of Punjab” by I P Singh, published by Times of Indai at source url: http://timesofindia.indiatimes.com/city/ludhiana/Haryana-Sikh-Gurdwara-Management-Committee-row-in-court-spotlight-back-on-burning-issues-of-Punjab/articleshow/39266710.cms .