Impunity for Crimes Against Humanity in Punjab: Cops Convicted for Fake Encounter of SIkh Youth Pardoned by Governor

Chandigarh: In a clear instance of endorsing Indian state’s policy of impunity for human rights abuser cops, the Governor of Punjab reportedly pardoned four police official who were convicted for murdering a Sikh youth in October 1993. 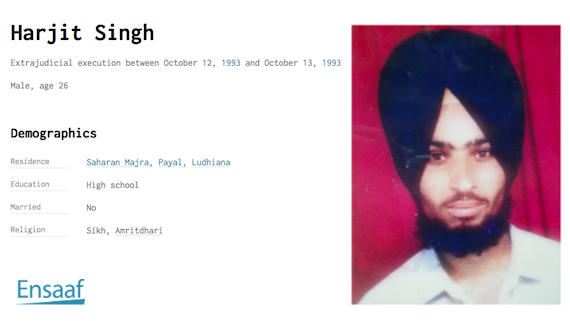 Source: A Screenshot from Ensaaf’s website | Note: Screenshot is modified by Sikh Siyasat

Crimes Against Humanity in Punjab – Case file of Harjit Singh:
According to data related to crimes against humanity collected and published by Ensaaf, Harjit Singh was an Amritdhari Sikh who studied till high school level. He was not a combat and was not even providing any support to the militants. He was abducted from his residence on October 6, 1993.  He was tortured during enforced disappearance and was extrajudicially killed on the intervening night between October 12 and 13 in 1993. His body was not returned to the family.

Bibi Paramjeet Kaur Khalra said that the pardon shows that the Indian state has implemented the policy of impunity to protect culprits cops who committed ‘crimes against humanity’ in Punjab.

In his statement Sukhbir Singh Badal said that the police personnel had abducted and killed an innocent Sikh youth in 1993 just to secure out of turn.

In a video posted over his Facebook fans page, Sukhpal Singh Khaira said that three of the four policemen pardoned by the Governor were from Uttar Pradesh and one from Punjab Police.
The Governor ordered their release from jail on the recommendations of Capt Amarinder Singh and DGP Dinak Gupta.

“Governor, CM and DGP had committed a serious crime against humanity and defeated the purpose of holding long trial of policemen in court of law. It amounted to backstabbing the family of victim Harjit Singh a resident of Saharan Majra village in Ludhiana district who was kidnapped and shot dead in fake encounter in 1993”, he added.

While demanding immediate reversal of the order of Governor, Sukhpal Singh Khaira said that they would move a Public Interest litigation in Punjab and Haryana High Court against the illegal order of Governor who as an appointee of President of India has misused his powers.