Chandigarh: The Aam Aadmi Party on Thursday (Nov. 15) demanded to probe the alleged involvement of Sukhbir Singh Badal in Maur bomb blast case. Just before the 2017 assembly elections, when Sukhbir Badal was the home minister of Punjab, a bomb blast took place in the election rally of Congress candidate from Maur Harminder Singh Jassi who is relative of Dera Sauda Sirsa chief Gurmeet Ram Rahim. A total 7 people including 2 children lost their lives in the incident.

Addressing the media at Chandigarh, MLA Aman Arora alleged that the involvement of Badal-Congress-BJP and central agencies is under scanner in the case as all were working collectively against AAP and to defame Arvind Kejriwal and grab the power in state. AAP Anandpur Sahib candidate Narinder Singh Shergill, Youth president Manjinder Singh Sidhu, spokesperson Neel Garg, state media incharge and member core committee Manjit Singh Sidhu were also present during the press conference. 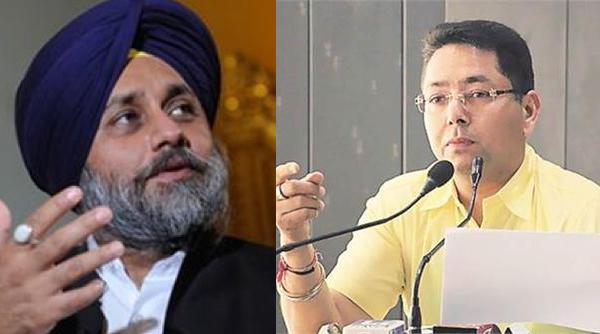 Demanding a time bound inquiry under guidance of Supreme Court, Aman Arora said that Sukhbir Badal and Capt. Amarinder alleged AAP in a similar tone even without having any proof. The same Sukhbir Badal is now demanding arrest of Dera premis for the blast. He asked Sukhbir what has changed in last one and half year that he had to change his statement.

Arora said that sequence and trail of events suspects the involvement of Akali-BJP and Congress in the case. He said that Dera chief is the close relative of Congress candidate Harminder Jassi and also the dera extended its political support to Akali-BJP in the elections. He said that around 44 candidates of Congress-Akali Dal visited Dera Sirsa to seek votes of dera followers that shows that both the parties fought elections collectively and tried hard to keep AAP out of power. The SAD member of parliament Sher Singh Ghubaiya during an interview accepted the fact that both parties were hand in glove in Jalalabad to defeat Bhagwant Mann.

Arora alleged that Sukhbir Badal has no stand and he has always used religion for his political gains, the same he did with dera followers. He said that Badals have always cheated the Punjabis to get the power. Arora said that anybody who is involved in bomb blast should not be spared despite his political stature and power.

Arora challenged that if involvement of AAP is found in any anti national activity the party is ready to face the action. He also demanded to include the name of Sukhbir Badal in the probe. He said that Sukhbir Badal and Capt. Amarinder must apologise to the AAP workers and people of Punjab for misleading statements on Maur blast and use it for political gains.