New Delhi: The re-arrest of Prisoner of Conscience Irom Sharmila by the Manipur police on the charge of attempting suicide, two days after a Manipur court acquitted her of an identical charge, reveals the cynicism of authorities in the state, said Amnesty International India today.

“Courts have now ruled three times in 18 months that Irom Sharmila’s hunger strike is not an attempt at suicide. Her re-arrest on the same charge flies in the face of common sense, and amounts to downright abuse of the criminal justice system,” said Tara Rao, Programmes Director at Amnesty International India. 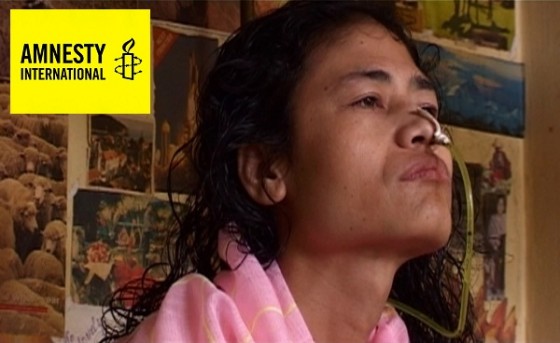 On 29 February, the court of the Chief Judicial Magistrate (Imphal West) acquitted Irom Chanu Sharmila of the charge of attempting to commit suicide, and ordered her to be released. The court stated: “One may appreciate the resolute commitment of [Irom Sharmila] to her stand rather than take it as an excuse for slapping her with charges of criminal offence.”

The court further stated that the prosecution had “miserably failed to prove the charges… of the offence of attempt to commit suicide”. It observed that “the India struggle and movement for freedom witnessed on many occasions [hunger strikes]…to agitate issues and highlight grievances or demands”.

On 23 January 2015, the Manipur police had similarly re-arrested Irom Sharmila a day after the court of the Judicial Magistrate (Imphal East) had rejected the charge of attempting suicide and ordered her release. On 22 August 2014, the police had re-arrested her three days after the Manipur East Sessions Court stated that her hunger strike was a ‘political demand through a lawful means’ and ordered her release.

In 2013, Irom Sharmila told Amnesty International India, “I love life and yearn for a sense of normalcy someday”.

“A hunger strike is not attempted suicide, and a hunger striker does not belong in jail,” said Tara Rao. “Authorities in Manipur must respect Irom Sharmila’s right to freedom of expression, drop charges and immediately release her. This farcical ritual of release and re-arrest needs to end.”

Irom Sharmila has been on a prolonged hunger strike for over 15 years, demanding the repeal of the draconian Armed Forces (Special Powers) Act (AFSPA), which provides sweeping powers to soldiers, including the power to shoot to kill in certain situations, and virtual immunity from prosecution in civilian courts. The law is in force in Jammu and Kashmir and parts of states in northeast India.

She has never been convicted for attempting to commit suicide. However, as the offence is punishable with imprisonment for up to one year, she has been regularly released after completing a year in judicial custody, only to be re-arrested shortly after as she continues her fast. She is detained in the security ward of a hospital in Imphal, Manipur, where she is force-fed a diet of liquids through her nose.

In February 2012, the Supreme Court of India observed in its ruling in the Ram Lila Maidan Incident case that a hunger strike is “a form of protest which has been accepted, both historically and legally in our constitutional jurisprudence.”

In December 2014, India’s Minister of State for Home Affairs stated in the upper house of Parliament that the central government had decided to repeal Section 309 of the Indian Penal Code, which makes attempting to commit suicide punishable with imprisonment for up to one year. However there has been little progress on this measure.