India should sign, ratify and implement International Convention for Protection of all persons from Enforced Disappearance

Jalandhar, Punjab: Slamming the Indian State for remaining in denial of the ongoing international movement against enforced disappearances, the Dal Khalsa demanded that Indian government should sign, ratify and implement the International Convention for the Protection of all persons from Enforced Disappearance.

On the occasion of the International week of the disappeared, the organization appeals to Sikh religious leaders and gurdwara management across the globe to make special prayers for the victims of enforced disappearance.

It is pertinent to mention that the last week of May is recognized internationally as the International Week of the Disappeared- a painful reminder that thousands of families still await information on the fate of their loved ones. 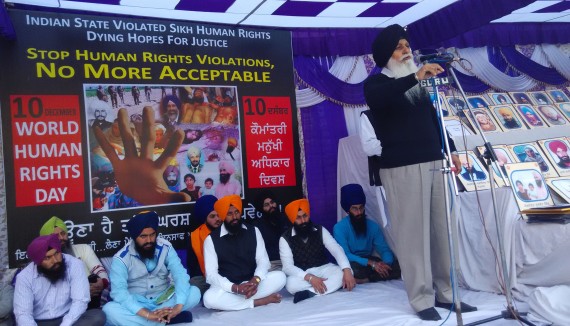 In a statement, party spokesperson Kanwar Pal Singh and secretary for human rights Pritpal Singh said this week provides an opportunity to remember the disappeared and acknowledge the struggle of their families.

They said according to existing documentation by NGO’s, hundreds of people have been subject to enforced disappearances in Punjab since 1984. There are 2500+ cases of illegal cremations in Amritsar and Tarn Taran district, they added.

They said successive governments in Punjab including the present one were also culpable for both aiding the State in the crimes and in the ongoing cover-up. Despite a campaign and hue and cry against enforced disappearances for 31 years, no action whatsoever has been taken.

They said the ruling Akali Dal in its election manifesto promised to set up inquiry commission to dig out truth including enforced disappearances, human rights violations and extra-judicial killings. However, no Commission of Inquiry as promised was set up. There have been no effective investigations. No prosecutions whatsoever. The issue of illegal cremations and enforced disappearances has been left unaddressed by the government, they rued.

They said this refusal by the Akali Dal to investigate enforced disappearance and illegal cremations was a continuing torture for the families of the disappeared.

They said theirs’ organization on Jan 26 2015, submitted a memorandum on the issue of enforced disappearances to the US President through American Embassy during Mr Barack Obama visit to New Delhi. Seeking international investigation to unearth the involuntary detentions, torture and deaths in fake encounters, we wrote to world’s strongest democracy apprising him that the families in villages throughout Punjab were still searching for relatives who were last seen in police custody and none of the senior security officials or the architects of the crimes have been held accountable.

Reiterating that as per international law, all present and past officials in positions of responsibility must be held accountable for their role in the crimes committed in Punjab, including the numerous enforced disappearances and illegal cremations. Until then, the aggrieved community and victims’ families would continue to struggle for justice.