Srinagar: A youth was killed and two others were injured allegedly in CRPF firing on demonstrators in central Kashmir’s Budgam district today, the police said.

Three persons were injured when CRPF personnel allegedly fired upon the protestors, who were protesting against the killing of two youths in an Army operation at Tral in south Kashmir’s Pulwama district early this week, media reports quote the police. 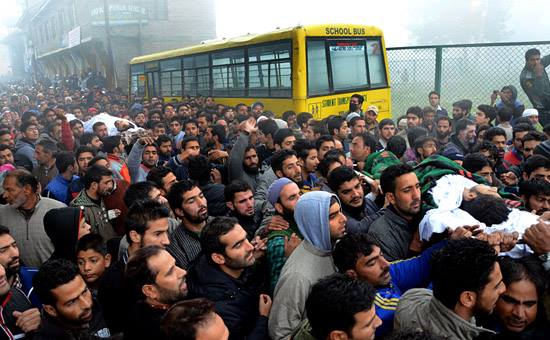 The injured youth were rushed to a hospital at Srinagar, where one youth identified as Suhail Ahmad Sofi succumbed to injuries.

The other two youth are being treated upon, the police said.

Police later admitted that the killing of the class 9 student, identified as Suhail Ahmad Bhat, at Narbal in north Kashmir was due to violation of the standard operating procedure (SOP) by security forces.

“We regret the unfortunate incident and extend our sympathies to the bereaved family. Preliminary enquiry conducted into the matter indicates that the forces deployed have acted in violation of the laid down SOP,” said a statement issued by the police.

He said a case under various sections of the RPC, including 302 (murder), has been registered at Magam police station.

“We regret the unfortunate incident and extend our sympathies to the bereaved family,” the spokesman said.

Meanwhile, authorities today placed several pro-freedom leaders, including Hurriyat Conference chairman Mirwaiz Umar Farooq, under house arrest even as a strike called by Hurriyat leader Syed Ali Shah Geelani over the killing of two youths at Tral evoked a partial response in some parts of Kashmir.

Mirwaiz was placed under house arrest this morning in view of fresh protests in some parts of the Valley, police officials said.

These leaders were placed under house arrest yesterday to scuttle Geelani’s proposed march to Tral town for registering protest against the killing of the two youths, claimed to be innocent civilians by local residents.

In view of the strike call, shops, business establishments, educational institutes and petrol pumps were shut in and around Lal Chowk city centre but most of them were open in the civil lines areas of the city as well as in other major towns of the Valley, the officials said.