Ludhiana: The National Investigation Agency (NIA) of India has recently registered two cases against a Canada based Sikh activist named Hardeep Singh Nijjar. Earlier the Punjab police had registered a case against him in 2016. Notably, Harjeet Singh Nijjar has been maintaining that he was being persecuted by India for his political beliefs. 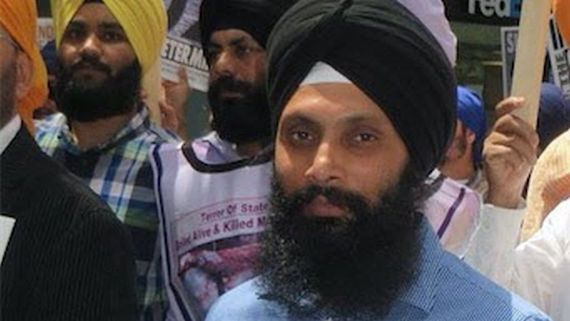 NIA records, available its website, show that the agency has booked Hardeep Singh Nijjar in two cases- numbered  as RC/15/DLI/2018 and RC/18/DLI/2018.

NIA’s Summery of Allegations in case RC/15/DLI/2018 reads: “The Central Government has received information that a case FIR No. 0099 dated 24.05.2016 has been registered at PS Dakha, Ludhiana (Punjab) under sections 120B, 124A & 153A of Indian Penal Code (IPC) and sections 10,16 & 18 of the Unlawful Activities (Prevention) Act, 1967 and section 25 of Arms Act relating to conspiracy hatched by one Hardeep Singh Nijjar, permanent resident of Canada, along with the members of proscribed terrorist organisation Babbar Khalsa International (BKI), to promote disharmony between different groups on grounds of religion and revive terrorism in the State of Punjab“.

Notably, this case was earlier registered by the Punjab police on 24 May, 2016 under PS Dakha, Ludhiana Rural, Punjab FIR No. 0099 and it is now transferred to the NIA. NIA says that the case is under investigation.

NIA’s Summery of Allegations in case RC/15/DLI/2018 reads: “Credible information has been received that one HARDEEP SINGH NIJJAR s/o Piara Singh, originally resident of VPO Bharsinghpur, PS, Phillaur, District Jalandhar, who is now based in Surrey, Canada, is conspiring and planning to carry out a major terrorist attack in India. HARDEEP SINGH NIJJAR has been engaged in several activities that are prejudicial to the Sovereignty and Integrity of India such as sourcing finance to procure arms/ammunitions and training Sikh youth for carrying out terrorist activities in India. He has certain associates in India who have conducted reconnaissance of gatherings of Rashtriya Swayamsevak Sangh (RSS) at certain places, including Punjab with an intention to target them and strike terror in a section of the people in India. He intends to execute the attack at a time and place where there is a large gathering so that there are maximum casualties“.

As per reports in Indian media Hardeep Singh Nijjar was detained by the Surrey unit of the Royal Canadian Mounter Police (RCMP) in the afternoon of April 13 but he was was released the next day.

The Indian media and agencies had made similar allegations against Hardeep Singh Nijjar in 2016, after he was booked at PS Dakha FIR No. 0099. At that time Hardeep Singh Nijjar had written a letter to Canadian Prime Minister Justin Trudeau maintaining that he was being targeted by Indian government for political reasons.

In his letter Hardeep Singh Nijjar had said that he had “never believed in, supported or been involved in any violent activity.”

“Because of my campaign for Sikh rights, it’s my belief that I have become a target of an Indian government campaign to label my human rights campaign as terrorist activities,” he had said in this letter.